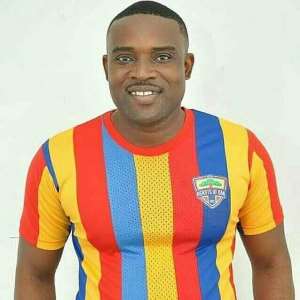 Thirty years of age, a husband, a father of two and a man with unflinching love for Accra Hearts of Oak, Elvis Herman Hesse is the man Hearts Supporters are looking to as the revivalist to re-energise the once dread support front of the club which is painfully in hibernation.

Hearts has suffered in all fronts over the past few years, the gap between supporters and management is getting wider by the day, in Elvis though, many delegates of the club believe that they have found the man to lead them to new heights and ensure that the club becomes stronger in the area of support.

This enthusiasm has been built on the back of brilliant ideas captured in fourteen pointers to drive the support base of the club to the next level. To many, it is the way to go.

Standing in the way of Elvis though is an elections on the 22nd of June at the Civil Service Auditorium and a contestant who has been the Vice Chair of the National Chapters Committee for the past eleven years. Despite the enormous experience he has in his bag, most supporters are of the view that he cannot be separated from the shortcomings of the former administrations and he has had enough opportunities to prove himself and hence, the current state of the Club’s support base reflects perfectly on him.

Elvis on the other hand is seen as youthful and full of ideas to give the Nation Chapters Committee the much needed lift it rightly deserves.

On the many innovations he intends to introduce, these three seems to have resonated with the supporters the most.

CATCH THE YOUNG
With the ever growing gap between the club and the youth of today, the catch them young policy will seek to introduce the club to children right from basic school going age through to Senior High School so that they grow with the love of the club.

This strategy has been bought by many because it is seen as the key to sustaining the strength of the club in a generation that seems more interested in foreign clubs and leagues than what is served domestically.

Added to the fact that people grow with the love of the club that caught their attention at their infancy, the Catch Them Young policy will be meeting them at a very strategic age.

With this policy, branded texts books and other paraphernalia of the club will be shared amongst the children along with handcouts that speaks about the club and its exploits

MEMBERSHIP DATABASE
With a Training in Computer Engineering, Elvis has pledged to use his expertise to bring all supporters under one umbrella and create a system that would make any follower of the club reachable.

This will enable the club easily disseminate information to the fans and reach out to key individuals who support the club but largely in the periphery.

His vision is to make supporters feel like the owners of the club and be motivated to contribute towards making it even greater.

SECRETARIAT
For the support base to be autonomous and take independent decisions in the interest of the group, there is the need for the NCC to have a dedicated working area detached from the main office of the club that has always been the meeting point of supporters.

This will bring an end to a problem that has affected the NCC to function properly as an independent entity of the club and even attract sponsorship.

Elvis Heman Hesse says it is his priority to bring an end to this problem.

What is left now is for the over four hundred delegates to choose their man and information on the ground indicates that it’d take a miracle in the highest proportion for Elvis to be defeated.

This is because in Elvis Hesse. Sopporters find answers to the key problems confronting the club. In him, they find a man strategy and desire to do things differently.

A Simple One National Data System Can Avoid Beatings, Slaps ...
45 minutes ago