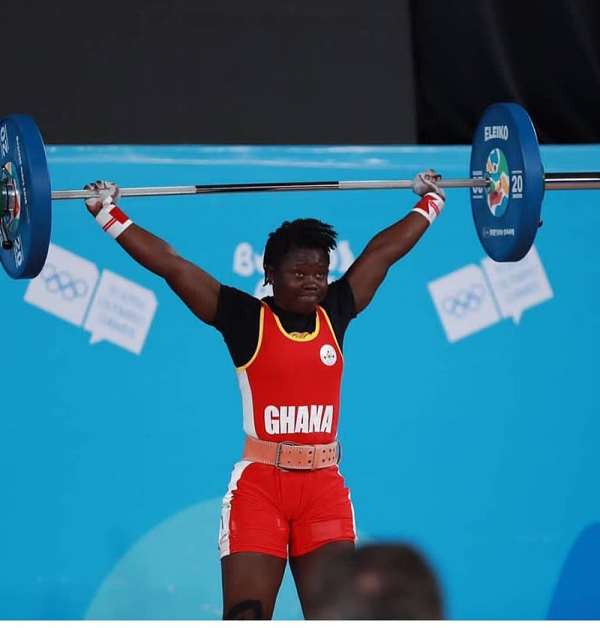 Ghana’s young female weightlifter, Buenos Aires 2018 Youth Olympics participant, Sandra Mensimaa Owusu, sat down with Uniqq Fm’s Juliet Kwakye; host of the Woman to Woman show to talk about her exploits in the world of weightlifting and how she navigates this supposedly male-dominated arena as a female as well as the challenges she has encountered so far.

In the interview, Sandra who is currently ranked 13th in the world, in the 59kg category (Youth division), stated that the world of weightlifting, although competitive is very open to females who want to get involved. She went on to encourage females to take up the sport, debunking the misconceptions held by society about women getting involved in the Sport, such as not being able to reproduce and looking masculine as a result.

She went on to talk about the benefits they would derive from participating in weightlifting, either for recreation or competition, such as increased self-confidence, stronger bodies and the mental fortitude needed to take on life’s challenges.

She encouraged parents whose daughters to want to take up the sport to support them and not discourage them because of the benefits they might derive from participation.

She highlighted the support of her parents as one of her key motivators for her exceptional performances.

With respect to the issue of gender equity in sport, she commended the Ghana weightlifting fraternity for their open-mindedness in the way the female athletes are treated.

She stated emphatically that females in the weightlifting world are not discriminated against on account of their gender but are rather embraced and supported by their male colleagues, hence making it feel like one big family.

Sandra went on to praise the Ghana Weightlifting Federation President and Current Ghana Olympic Committee President; Mr Ben Nunoo Mensah for his continuous support for women in the sport, his tireless efforts to ensure the growth of the sport of Weightlifting and his selfless dedication to enhancing the lives and wellbeing his athletes.

She urged corporate bodies to invest in other sports disciplines besides soccer so as to bring about a higher medal count in international games. She went on to add that the investment will go a long way to make athletes lives easier so they can focus on training and rise to the level of their foreign counterparts.

She also talked about how she has to balance work as a seamstress with training for competitions which happens to be an extremely stressful endeavour.

She also talked about the stress, the lack of investment in both the athletes and their federations, stating that, the federations cannot carry out the task of athletic development on their own, so government and other private partners need to need to invest in sports over the long term so that athletes can be properly groomed for international competition.