Ashgold Were Better Than Us, Says Kotoko Coach CK Akunnor 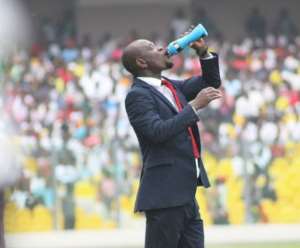 Asante Kotoko head coach, Charles Kwablan Akonnor has admitted that Ashanti Gold were better than his side after their 3-1 defeat in the semi-finals of the Normalisation Committee Tier-2 Special Cup at the Accra Sports Stadium on Wednesday.

According to him, his side could not stand the dynamite of Ashanti Gold midfielder Appiah McCarthy and insisted his players were not eager compared to Sunday's victory against Hearts of Oak in the tier-1 Special Cup.

"We lost because we couldn't keep the ball. Our opponent were better than us in terms of possession," he told the Press.

"They controlled the game. We came in with the idea of stopping the midfield by making sure that players like McCarthy (Appiah) and others wouldn't get much of the ball. We couldn't handle the situation in midfield.

"Fortunately for us, we got an early goal which normally would encourage any other team to play but we lost it in the middle. Ashanti Gold controlled the game. They play very well. They were better than us. We didn't do well.

"The ability to show hunger for success was not there today (yesterday) compare to what we did against Hearts of Oak," he ended.

Ashanti Gold will face Nzema Kotoko in the finals of the competition after their 2-1 win against Unistar Academy at the Cape Coast Sports Stadium.

BOST Undertakes Disinfection, Fumigation Of Its Offices
26 minutes ago