AFCON 2019: Black Stars In The Pool For Conditioning Ahead Of AFCON 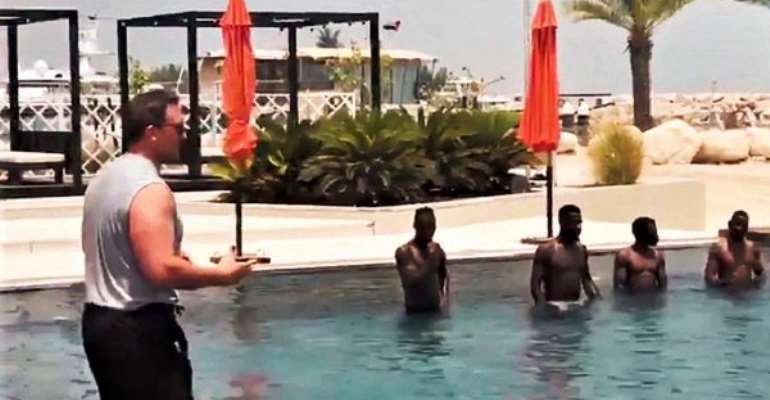 Ghana’s Black Stars have stepped up their training to build on their condition as they went off the pitch and worked out in the pool for their training session yesterday.

Under the guidance of their fitness trainer, Simon Copley, the Ghanaian players spent considerable time in the pool at their Dubai training camp.

The morning workout was aimed at improving the team’s endurance and the cardiovascular health of the players to fine-tune their physical conditioning for the Africa Cup of Nation (AFCON) tournament, which starts on Friday, June 21 in Cairo, Egypt.

The Stars are scheduled to leave Dubai for Ismailia, Egypt, on Thursday to round up their preparation for the competition as they set out to end Ghana’s 37-year wait for continental glory.

They are drawn in Group F from where they will strive to qualify for the Round of 16, starting with the game against Benin on June 25 and against Cameroun on June 29 both at the Ismailia Stadium, with the final group game against Guinea Bissau on July 2 at the Suez Stadium.