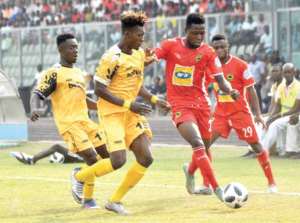 Obuasi Ashanti Gold has advanced into the final of the tier 2 of the Ghana Football Association (GFA) Normalization Committee (NC) Special Competition after defeating Kumasi Asante Kotoko 3-1 at the Accra Sports Stadium on Wednesday afternoon.

The Ashanti derby as it always touted, grace the capital city of the country as one of two semi-final matches with both sides looking for the edge over the other to book a place in the grand finale.

At the end of the 90 minutes though, it is the Miners who have emphatically dispatched the Porcupine Warriors. Having drawn the first blood through Naby Keita on the 4th minute, the Reds could not hold on and went on to conceded three goals.

The victors drew level courtesy a header from Yussif Mubarak before Emmanuel Owusu and Mark Agyekum added two more to seal the victory.

The victory means that the Obuasi based club has booked their ticket to the final of the tier 2 competition where they play Nzema Kotoko. The winner of that fixture will have the opportunity to represent Ghana in the next edition of the CAF Confederations Cup.