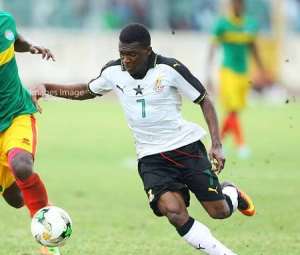 Ghanaian International, Thomas Agyepong has disclosed that he is excited ahead of his first major tournament, having been included in the final 23-man squad expected to battle the best on the continent at this year’s Africa Cup of Nations (AFCON).

Having been named in head coach James Kwesi Appiah’s provisional squad, the Manchester City attacker was fortunate enough to get a spot in the final 23-man team a couple of weeks ago and has been with the side at their training camp in Dubai as they continue preparations for this year’s AFCON.

Speaking to a Joy FM reporter at the team’s camping base, Thomas Agyepong indicated that the AFCON is a big stage and he is aware of what is at stake because a lot is expected from every player.

According to him, he has always dreamt of playing at such a tournament and he is happy the management of the team has given him the opportunity to live that dream.

“It is really big. To be honest I think this is my major tournament in my football career giving the fact that am young as well and I know what is at stake. A lot of expectations on us but for me, this is also exciting”.

“For me I have always wanted to play in such a tournament because there have been some great names in Ghana’s history that have played in this tournament so as a young player to be given that opportunity from the management team and the whole Ghanaians to have that faith in me, I think that should give me the confidence to go out and then give out my best”, the former u-17 player shared.

Agyepong will be operating from the wings for the Black Stars at this year’s AFCON. He has played in all two friendly matches against Namibia and South Africa and hopes to be in good shape to help the team win the title.

Covid-19: Over 200 Children In Ghana Tested Positive
1 hour ago