I Was Used As Human Guinea Pig – Semenya 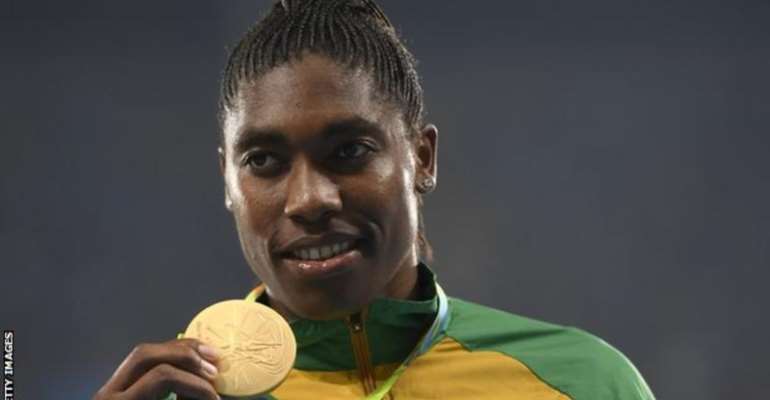 Caster Semenya says athletics' world governing body "used" her like "a human guinea pig" by insisting she takes medication to control her testosterone.

South Africa's Semenya, 28, is in legal dispute with the IAAF, who have said the 800m runner must take medication or compete over a different distance.

The two-time Olympic champion says the drugs made her feel "constantly sick" and have "unknown health consequences".

"I will not allow the IAAF to use me and my body again," said Semenya.

Semenya spoke out as the Court of Arbitration for Sport released a 163-page document explaining in detail why it had rejected her appeal against the IAAF's rules.

Since the Court of Arbitration for Sport's decision, she has gone to Switzerland's Federal Supreme Court (SFT), which has temporarily suspended the IAAF ruling.

"The IAAF used me in the past as a human guinea pig to experiment with how the medication they required me to take would affect my testosterone levels," added Semenya.

"Even though the hormonal drugs made me feel constantly sick, the IAAF now wants to enforce even stricter thresholds with unknown health consequences.

"I am concerned that other female athletes will feel compelled to let the IAAF drug them and test the effectiveness and negative health effects of different hormonal drugs. This cannot be allowed to happen."

IAAF rules state Semenya - and other athletes with differences of sexual development (DSD) - must either take medication in order to compete in track events from 400m to the mile, or change to another distance.

People with a DSD do not develop along typical gender lines. Their hormones, genes and reproductive organs may be a mix of male and female characteristics, which can lead to higher levels of testosterone - a hormone that increases muscle mass, strength and haemoglobin, which affects endurance and which - the IAAF argued - gives Semenya and DSD athletes an unfair advantage over other women.

Since the ruling, Semenya has raced over 2,000m and took victory at the Meeting de Montreuil in Paris.

She has been named in South Africa's preliminary squad for the World Championships in Qatar later this year but has only been entered in the 800m, meaning her participation depends on the outcome of her appeal.

The Court of Arbitration for Sport has said the new rules for athletes with differences of sexual development were discriminatory but concluded that the discrimination was "necessary, reasonable and proportionate" to protect "the integrity of female athletics".

The IAAF has welcomed the full release of the Cas findings, saying: "Having the arguments of all parties and the detailed findings of the Cas panel in the public domain will help to foster greater understanding of this complex issue.

"The IAAF considers that the DSD regulations are a necessary, reasonable and proportionate means of protecting fair and meaningful competition in elite female athletics, and the Cas agreed."