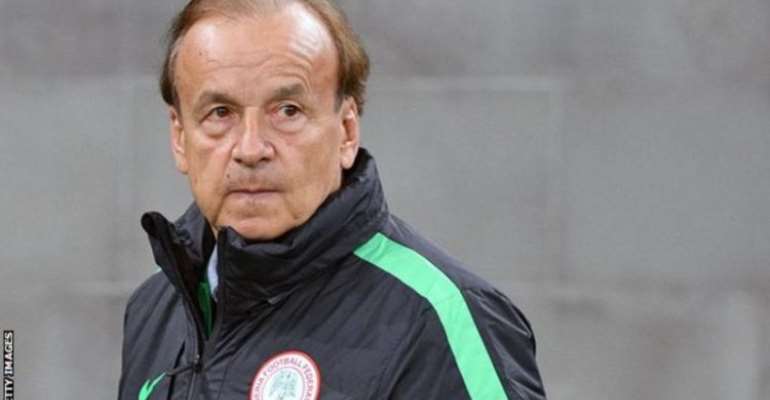 Nigeria head, coach Gernot Rohr has downplayed his team’s chances of winning a fourth title at the 2019 Africa Cup of Nations in Egypt which kicks off on Friday.

Champions in 2013, expectations are high as the Super Eagles return to the mix after missing back-to-back tournaments in 2015 and 2017.

The Nigeria Football Federation (NFF) president Amaju Pinnick believes the squad has been given all the necessary support to succeed in North Africa.

But Rohr is playing down expectation.
“Our aim at this moment is to stay humble and not get too excited,” the Nigeria coach told BBC Sport.

“To say we have to win the Afcon is not my philosophy because we are a very young team.

“Already the president said we must win it, but this is not the ideology. We are only making a return after a period of absence so we have to play with happiness and enthusiasm in Egypt.

“Our young team will do our best. We have a chance to reach the last four, which for me is already a good result.”

Nigeria landed in Egypt with 20 players who will be making their debut at the tournament. Captain John Mikel Obi along with Ahmed Musa and Kenneth Omeruo are the only surviving members from the class of 2013.

But Rohr is unconcerned about the lack of experience in his squad and insists their ‘spirited’ performance at the World Cup in Russia will come in handy.

“They did very well in Russia and won hearts, I can tell from the reactions of the fans at home and everywhere I go.

“In defence we have Balogun who is very mature. The captain Mikel is back in midfield. John Ogu is experienced and we already know everything about [Wilfred] Ndidi.

“Alex Iwobi is young but brings experience in the forwards. Ahmed Musa and Ighalo also have experience. We must find a way to blend them all together.

“The youthfulness in the squad is good because the future will be bright. Also, they can draw very positive experience from their spirited performance in Russia.”

Nigeria will face one of the pre-tournament favourites Senegal in a behind-closed-doors friendly in Ismailia on Sunday.

The three-time champions kick off their campaign against Burundi on 22 June in Alexandria, before facing West African rivals Guinea in the second Group B match on 26 June and debutants Madagascar four days later.