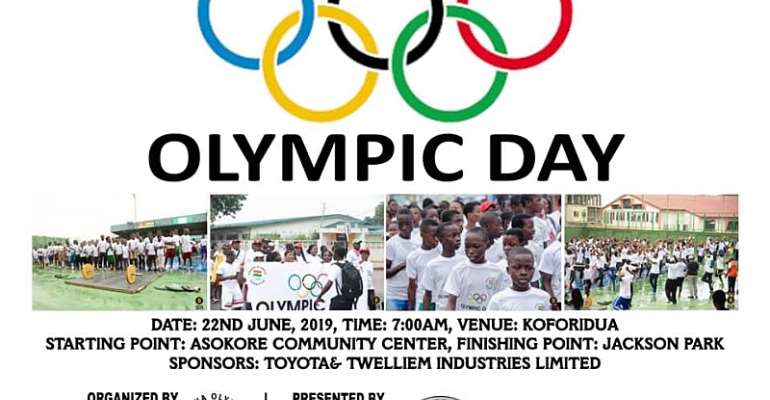 Mr. Isaac Aboagye Duah, Chairman of the Planning Committee for the 2019 OLYMPIC DAY RUN (ODR) in Koforidua has disclosed that the last time event was held and celebrated in Koforidua was 30 years ago and it was such a success.

He said Ghana is committed to the values and goals of the Olympic Movement and will always support all activities and programmes of the international body.

“We want other regions to have a feel of what the ODR is all about and not feel everything is centred in only the capital, Accra. This year we are organizing a Health Walk that will involve 7 SHS, Women Sports Association of Ghana (WOSPAG) and Keep Fit clubs, We are expecting over 700 participants” he said.

According to Mr. Duah who is also the president of the Ghana Tennis Federation (GTF) the highlights of the event will be massive as the walk will commence from the Asokore community centre through the principal streets of Accra ascend at the Jackson park.

“We will witness a Taekwondo display by girls from the Mamfe Methodist girls school, do aerobics exercises and later embark on a tree planting exercise at Galloway, a suburb of Koforidua, as you know the town is noted for flowers and we want to add to the beauty of the land” he assured.

He named some guests for the occasion as the Eastern Regional Minister, Hon Darfour, the sitting Members of Parliament for New Juaben North and South as we as the GOC president, Mr. Ben Nunoo Mensah” he expressed.

He urged sports loving people to turn up in their numbers to participate as certificates from the IOC would be given to all those who start and complete the Health Walk.

He hinted that security and medicals/ambulance have been secured.