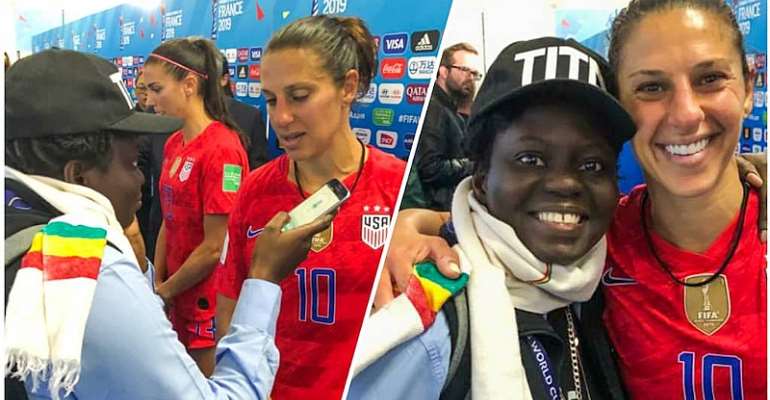 The reigning FIFA Women's World Cup winning captain, famous for her halfway line goal in the 2015 final, surprised Ghanaian reporter Angela Akua Asante in a tweet which went viral and even got picked up by mega American media outlet, CBS News.

Not all heroes wear capes, they say! Some also wear football kits and boots. Their job is simple; to invoke ecstasy, nostalgia and a tirade of emotions within fans with thrilling performances on the field of play. Such is Carli Lloyd, the number 10 player of the United States women's national team for whom Triple A, Ghana's only accredited FIFA Women's World Cup journalist currently present in France, expresses much admiration.

On Tuesday in Reims, France, the veteran netted her team's final goal in the historic 13-0 mauling of Thailand. Lloyd's objective, as she revealed during her exclusive post-match interview with Asante, was to make the most of her substitute appearance in the hopes of regaining her First XI status under coach Jill Ellis.

The 3:30 minutes-long mixed zone interview also touched on Carli Lloyd's opinion on the USWNT's Matchday 1 performance and the wailing of her critics. When all was said and done, the 36-year-old dropped a polite request to know if Triple A cared for a photo.

Scared of potentially breaching the FIFA Media rules and losing her accreditation, the reporter -- whom Lloyd described as "my number one fan in Ghana" -- was locked in a dilemma. Time was successfully frozen and the memory which found its way onto social media was soon endorsed by the legendary American footballer.

As if quoting AAA's tweet to her +828K followers was not generous enough, Lloyd offered the "Fabulous France with Triple A" TV show producer a double treat by wishing her a happy birthday.

Among the replies that the quoted retweet attracted was one from Thailand's battered goalkeeper, Sukanya Chor Charoenying. The thread eventually made its way in a column by Christina Capatides on CBSnews.com.

Angela Akua Asante aka Triple A has since left Reims where her dream of meeting Carli Lloyd came true. Ghana's lone representative is currently in a third host city, Rennes, to cover the crucial France vs Nigeria match at the 2019 FIFA Women's World Cup.

Akufo-Addo commences process to remove Anin-Yeboah over $5m ...
23 minutes ago