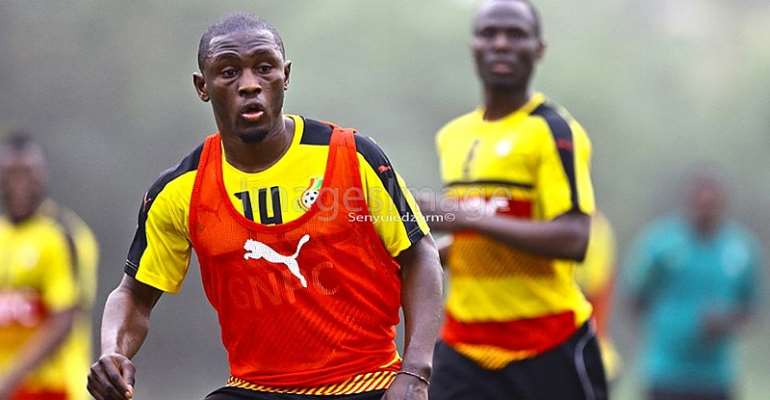 The ex-wife of FC Nantes striker Majeed Waris says she is full of joy after the former FC Porto player failed to make Ghana’s final 23-man squad for the 2019 Africa Cup of Nations in Egypt.

Habeeba Sinare, says the striker is duly paying for the ill-treatment she went through since the two got married in 2017.

The Right to Dream graduate was dropped from the Black Stars’ final 23-man squad for the continental showpiece which will be held in Egypt.

According to her, Waris and his family painted a picture that she was into the marriage for the player’s money, which absolutely wasn’t the case.

Speaking in an interview with Accra-based Hitz, Sinare said “I’m proud divorcee, excuse me to say and I think it’s just the type of era that I am in that there’s the lack of impatient young ladies and I think I’m one of them because I don’t have patient and my divorce was based on something else,”

“This is a man (Abdul Waris), that I will say I’m way educated than but It has gotten that I don’t hope to love again, as I’m sitting here I don’t any man in my life because I have noticed from my life experience that if you be with a man that is lesser than you he treats you like a b*tch”

“That’s the life I gave learned so I keep preaching to other women to get what they’re because I was in School when I got my man and because of him I left school and as I’m talking to you, I am starting all over again and I am not shy because I was a medical student”

“Now I’m in another sector and I always put everything to God and I feel that God has already ordained that I’ll never be a doctor but as I’m sitting down here I was left with a year to become a certified midwife.

“This is a man I left my family to support him for his marriage to be done, this is a man In stood by even though I knew he wasn’t educated to my level.

”I’m not saying he wasn’t rich, he was rich but if you see my wedding you’ll not believe it. I got married like someone who has been married ten times and this is the eleventh wedding”

“He and his family made me looked like I was in for his money but this is someone who’s a soccer player but when we go outside, I basically do everything for you. I’m your lawyer, doctor, wife, child and everything but you treat me like your family is better than me”

“I don’t wish him bad but as I’m talking to you now he’s paying for it. He is one of the players the coach has told them to come back”

“I’m now a single parent. I’m a very young lady but the type of responsibilities this young guy has placed on my head, I cry every whenever I see my child.”

Habeeba Sinare is the daughter of Alhaji Sinare, former NDC Member of Parliament for Central Ayawaso who has served at Ghana’s Ambassador to Saudi Arabia and a niece to celebrated actress Kalsoum Sinare.