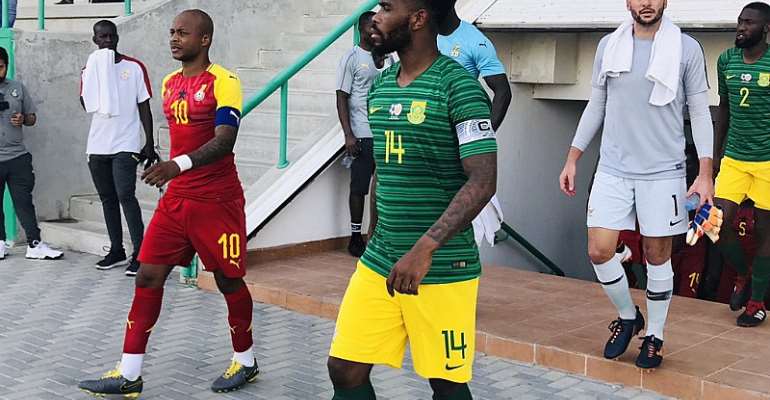 The Black Stars of Ghana on Saturday afternoon wrapped up their friendly matches ahead of the of 2019 Africa Cup of Nations (AFCON) following a goalless draw match with the Bafana Bafana of South Africa at the Police Academy Park in Dubai.

This is the second friendly match slated for the team as part of their pre-tournament training camp in the United Arab Emirates. First, the team played against Namibia last weekend where they lost by a lone goal to nil.

Having taken to the field to test their strength again, Coach Kwesi Appiah’s men had to settle for a goalless draw with their South African counterparts. Though the result seems to be an improvement on the first friendly against Namibia, their inability to put the ball at the back of the net has raised red flags ahead of the continental showdown.

Nonetheless, it is fair to say that the Black Stars played some entertaining and good football with a strong team put together by Bafana Bafana head coach Stuart Baxter.

Both sides, had decent opportunities in either half to get on the score sheet but failed to do so. Ghana on the day dominated their opponent whiles enjoying the better of possession. They were, however, unable to put the ball into the back of the net. The closest they came was in the dying minutes of the games when general captain Asamoah Gyan saw his head crash into the post.

Ghana is expected to spend another week in Dubai before finally moving to Egypt for the continental showdown on June 21. They have been pitted in Group F together with Benin, Guinea Bissau, and Cameroon.

Akufo-Addo commences process to remove Anin-Yeboah over $5m ...
24 minutes ago