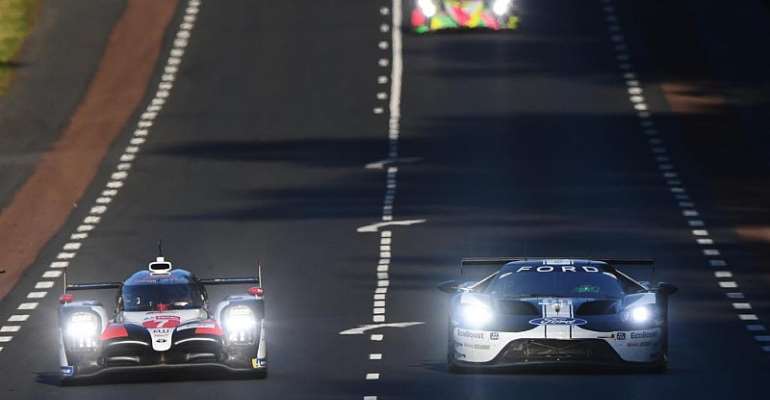 Lights are out and racing is underway at the Circuit de La Sarthe for the Le Mans 24 Hours endurance race, with an all-Toyota front row led by the #7 car of trio of Mike Conway, Kamui Koboyashi and Jose Maria Lopez.

The 37-year-old Spaniard is hoping to add back-to-back Le Mans 24 Hour titles to his two F1 trophies in his last appearance at the classic race.

Alonso is one of the main drawcards at the 2019 event – despite an almost certain win for the Toyota hybrids, barring an accident. The Japanese team was unchallenged last year after Porsche and Audi pulled out, leaving Toyota Gazoo Racing as the only manufacturer in the top LMP1 category.

But it's far from just the elite prototype class that brings the 250,000 spectators to the Le Mans 24 Hours, with professional race drivers mixing it with amateurs in the other LMP2, GTE Pro and GTE Am categories.

The top LMP2 starter is the #28 TDS Racing Oreca of François Perrodo, Loïc Duval and Mattheiu Vaxiviere, who inherited the category pole after the Graff squad was stripped of it, following Vincent Capillaire's failing to come in for a random weight check by the stewards.

Aston Martin took top spot in the GTE Pro class thanks to Marco Sorensen who put the #95 Vantage ahead of Ford, Corvette and Porsche.

Porsche also locked out the top three places in GTE Am, with Matteo Cairoli taking pole in the #88 Dempsey-Proton car with a best time of 3m51.439s.

BOST Undertakes Disinfection, Fumigation Of Its Offices
54 minutes ago