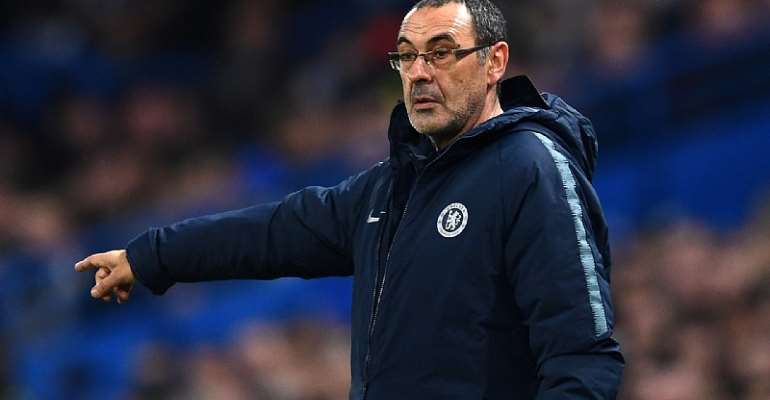 Chelsea have agreed a deal in principle for their manager Maurizio Sarri to join Serie A champions Juventus.

An agreement was reached late on Thursday evening after talks between senior officials. A deal could be completed as early as Friday.

It is understood a compensation fee in excess of £5m has been agreed.

Sarri arrived from Napoli in July 2018 and led the Blues to third place in the Premier League and won the Europa League in his one season in charge.

Despite signing a three-year deal last July, he will become the ninth full-time manager to leave the club under Chelsea owner Roman Abramovich.

Throughout the 60-year-old Italian's time at Stamford Bridge, there was repeated speculation about his position, with Chelsea fans expressing their discontent at tactics and team selections.

One of the low points came in February when goalkeeper Kepa Arrizabalaga challenged his authority by refusing to be substituted in the Carabao Cup final at Wembley, shortly before Chelsea were beaten in a penalty shootout by Manchester City.

But Sarri did manage to win his first ever trophy as a manager with a 4-1 victory over Arsenal in May in the Europa League final, and after the match said "he deserved" to stay with the club.

Chelsea are currently unable to sign any players after they were banned for two transfer windows by Fifa - a decision they are appealing at the Court of Arbitration for Sport.

Their star player Eden Hazard has joined Real Madrid for a fee that could exceed £150m.

Significantly, Chelsea have not asked for the suspension to be put on hold until a final decision is reached. It means their only new arrival might be USA forward Christian Pulisic, a £58m signing from Borussia Dortmund in January, who spent the remainder of the campaign on loan in Germany.

Juventus are managerless after Massimiliano Allegri left at the end of last season, having won the league title in each of his five seasons since taking charge in 2014.