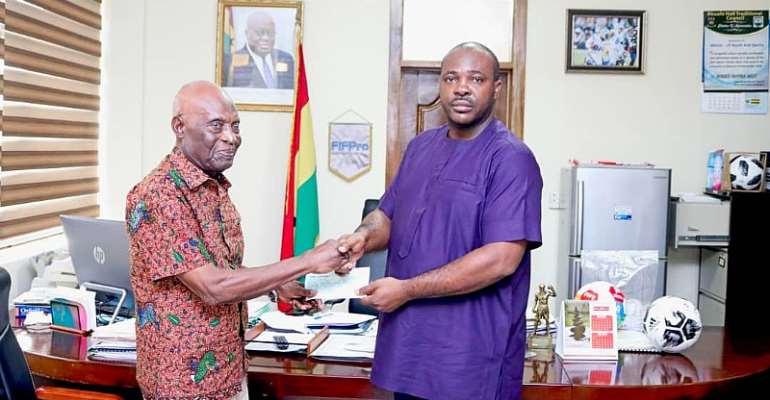 The Minister for Youth, Sports, and Culture, Honorable Isaac Kwame Asiamah has rewarded GH¢35,900 to Dr. Kwamena Oboe Quansah who was the team doctor for the Black Stars team that won the Africa Cup of Nations (AFCON) tournament in 1965.

The gesture according to the Minister has become necessary after his attention was drawn to the fact that the medical doctor was left out when the State rewarded the team for that AFCON triumph.

Aside from his accomplished medical duties in the National team, Dr. Quansah served on the FA Technical Committee in 1978 when Ghana hosted and won the continental showdown.

Beyond that, he was a venerable football administrator, serving as a GFA vice chairman during Lawton Ackah-Yensu era (1983-84)

The veteran who has paid his dues to the country was invited to the Ministry on Thursday where he was presented with a cheque for his reward.

Meanwhile, the current Black Stars team will be fighting for continental glory later this month when they make another appearance at the AFCON tournament. Having failed to win the trophy in 37 years, hopes are high for the team to finally break the longtime jinx in order to restore the lost glory.