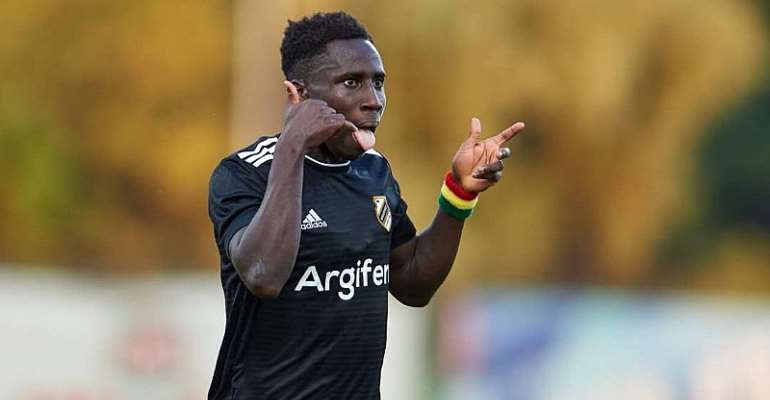 Samuel Kwame Owusu is a Ghanaian professional footballer who plays as a winger for Serbian club Čukarički. He was born on March 28, 1996 (age 23), in Accra.

He has been described by Kwabena Yeboah SWAG President as the wonderful revelation of the team for the 2019 AFCON in Egypt as he is very courageous and can tackle and dribble and can also shoot accurately at goal.

The veteran sports journalist said Owusi is nimble-footed and can split defence and very quick on the ball.

Born in Accra, Owusu played for Red Bull Ghana and Vision in his homeland, before moving abroad to Serbia and joining Radnik Surdulica in August 2014. He made 12 appearances in the 2014–15 Serbian First League, helping the club win the title and promotion to the top flight.

In the 2015–16 Serbian SuperLiga, Owusu started playing more regularly, scoring seven times in 30 games. He signed a one-year extension with the club in May 2016.

In June 2016, Owusu was transferred to Turkish club Gençlerbirliği on a two-year deal with an option for another year. The transfer fee was reportedly €200.000. He made three appearances in the 2016–17 Turkish Cup, scoring one goal in a 6–0 home victory over Amed.

In August 2017, Owusu returned to Serbia and joined Čukarički, penning a three-year contract and receiving the number 19 shirt. He scored four times in 30 games during the 2017–18 Serbian SuperLiga.

PHOTOS: Ghanaians hit the streets of Accra for #FixTheCountr...
45 minutes ago