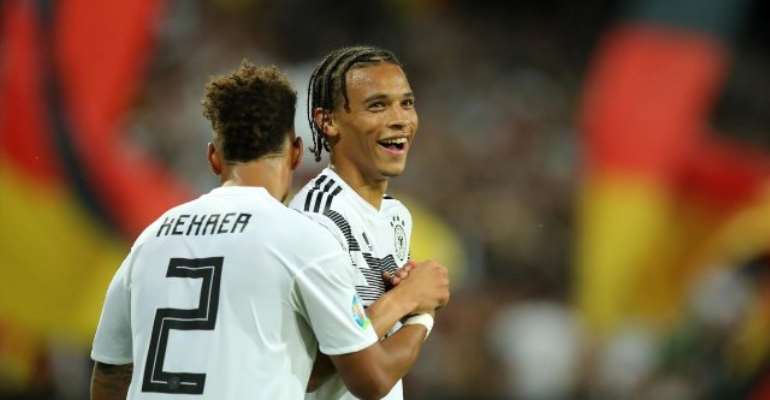 Germany scored five times in 27 minutes in the first half to crush Estonia 8-0 on Tuesday and make it three wins in three Euro 2020 Group C qualifiers.

The Germans are now on nine points, three behind group leaders Northern Ireland, who have four wins from four but needed an 86th-minute winner by Paddy McNair to edge past hosts Belarus 1-0.

Marco Reus and Serge Gnabry scored two goals each and Leon Goretzka, Ilkay Gundogan, Timo Werner and Leroy Sane were also on target for Germany in a completely one-sided encounter in Mainz against Estonia.

The Germans are looking to rebuild after their woeful World Cup first-round exit last year along with their Nations League relegation.

Elsewhere, Wales' Euro 2020 hopes took a hit in Hungary where the hosts grabbed a late goal to steal all three points.

Mate Patkai pounced on a free ball in the Wales box to hammer home the winner in the 80th minute to send Hungary to the top of Group E.

Wales sit in fourth place with only one win from three matches so far in their qualifying campaign.

World champions France bounced back from Saturday's defeat to Turkey with a comfortable 4-0 away win in Andorra.

Kylian Mbappe opened the scoring, with his milestone 100th career goal. Wissam Ben Yedder, Florian Thauvin and Kurt Zouma added to the scoresheet later on in the match.

The win restored Les Bleus' position at the top of Group H on goal difference, sitting on nine points alongside Turkey and Iceland after four matches.

Steve Clarke experienced his first loss as Scotland manager as his side were comfortably beaten away in Belgium, thanks to a brace from Romelu Lukaku and a late goal from Kevin de Bruyne.

The Red Devils continued their 100% win record and hold the leading position in Group I, while Scotland languish in fourth place with two wins and two losses.

In Group J, Italy fought back against Bosnia & Herzegovina to grab all three points with a late goal from Marco Verratti.

Roma's Edin Dzeko opened the scoring with a nicely worked goal, but a superb volley from Lorenzo Insigne leveled the scoring just after half time.

Roberto Mancini's side sit on top of the table with four wins from four.