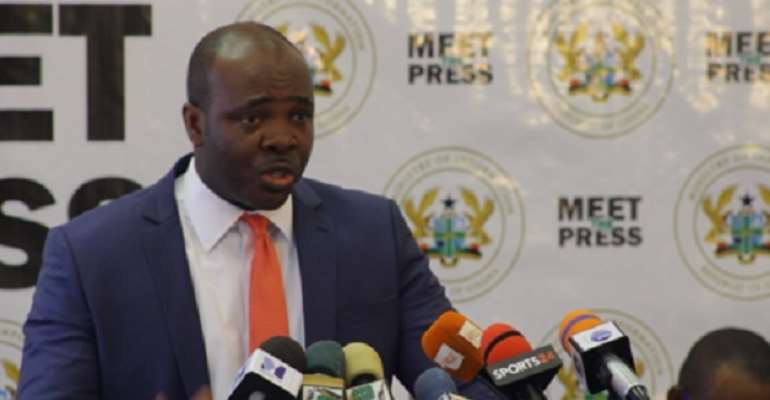 The Ministry of Youth and Sports has budgeted a humongous record amount of $15 million to execute Ghana's 2019 Africa Cup of Nations campaign, representing the highest amount ever spent by a country playing in the tournament, a reliable source has revealed.

The Sports Minister, who had vowed to slash Ghana's financial expenditure on the Black Stars in the face of grinding poverty facing the ordinary taxpayer, is alleged to have sneakily put forward 8 Billion Old Ghana Cedis to be spent on the lavish trip to Egypt.

With the Black Stars already in the UAE on their plush training tour at the expensive holiday resort of Jebel Ali, it is a clear indication that the mammoth budget has been approved as expenditure on the tournament has already started.

Knowing that this budget will generate a huge public outcry in the country, the Sports Ministry has refused to tell Parliament about the budget for the tournament which has generated an angry reaction from the Minority in Parliament who are now demanding urgent answers in the House from the Minister Isaac Asiamah today.

According to the source, Hon Isaac Asiamah's ministry has budgeted to spend $9 million on the Black Stars including their mammoth appearances fee of $80,000 per person, $10, 0000 for each player and official with rest of the money going into air travel, hotels and medical expenditure.

The government is also planning to spend $3.7 million in sending 100 supporters to Egypt to cater for their airfares, hotel accommodation and per diems.

A further $2.5m has been budgeted for 55 media personnel to be sponsored to the tournament - a concept craftily designed to buy their silence to mask the plundering of meagre state resources to fund the campaign that can only generate the country $4.5 million if the Black Stars win the trophy. This means a debt of $10 million will be wracked even if Ghana wins the title.

The insider further revealed that parts of the budgets for the supporters and media will be massaged to be spent on 'ways and means' and spiritualism in a highly spiritual campaign.

An Accra-based media house has already rejected an approach by the Sports Ministry to send their reporter on the all-expenses-paid trip to Egypt, knowing it is designed to stop objective reporting.

The Sports Writers Association of Ghana (SWAG) that was previously loud about contents of the budget for the tournament has shockingly been silent as some of their leaders are said to have joined the trip to the UAE and will benefit from the free trips to Egypt.

Some sports journalists who had been highly critical about budgets for the Black Stars have corruptly gone silent after enjoying the largess of the ministry on recent free trips with the team.

Despite promising that it would make the budget public when the team starts preparations when reports emerged last month of the $8 million budget, Elvis Adjei-Baah, Public Relations Officer (PRO) of the Sports Ministry has still not issued a statement nearly two weeks into the Black Stars starting their training camp.

“I can say that there is no budget approved yet or in place for the AFCON. There is a delegation currently in Abu Dhabi trying to get a camping facility for the national team, so there is no way we would have come up with a budget once that is not even sorted yet," the ministry's statement signed by Adjei-Baah said last month.

“Once everything is concluded and is appropriate, we would communicate to the good people of Ghana how much budget has been presented or approved,” the statement added but days, after the campaign has started there, has been no word from the ministry.

Ghana have already been given $260,000 for AFCON 2019 preparation by the Confederation of African Football (Caf), as the continental governing body gave the same amount to all 24 participating teams.

The winner of the AFCON trophy will take home $4.5 million as prize money.

$475,000 will be for each team that will be eliminated at the group stage, meaning that all the countries competing at the tournament will receive at least $735,000 each from prep money and group stage earnings.

Last edition’s winner and defending champions, Cameroon, got $4 million for winning in 2017.

Runners up, Egypt received $2 million, while Burkina Faso and Ghana, the two semifinalists, went home with $1.5 million each.

Ghana is drawn in Group F with Benin, Cameroon and Guinea Bissau.

THE PREVIOUS FIGURES
Ghana’s estimated budgets for three of the last four have been as follows: