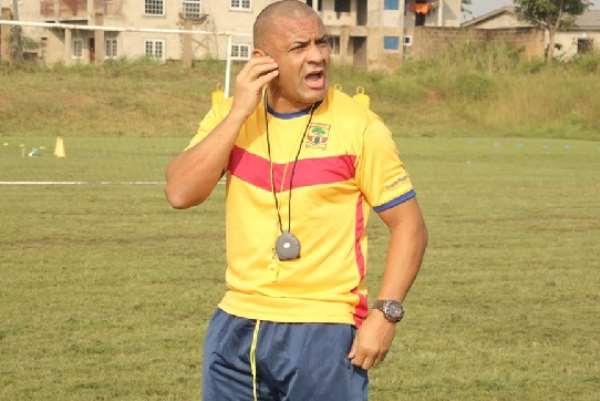 Sunday's clash of the Titans between Accra Hearts of Oak and Kumasi Asante Kotoko at the Accra Stadium is as much about which side inches closer to the Champions League slot as it is about the rival coaches proving the worth on the local scene.

For the first time since they became coaches and took charge of their respective teams, Hearts’ Kim Grant and C.K Akonnor of Asante Kotoko, friends and former Black Stars teammates, come face to face against each other as they lead their teams to vie for a ticket to the final of the Tier One of the Special Competition.

The two lead their sides, mindful of their mandate to deliver a CAF Champions League berth for the upcoming season.

It is not just the fact that Hearts’ Grant and Kotoko’s Akonnor lead the two most glamorous clubs in Ghana at the moment but it is what they have managed to do with the fortunes of these clubs that bring them under the spotlight on Sunday.

Grant, since taking charge of the Phobians last November, has succeeded in building a steady and cohesive team and have lost only twice in the Tier One campaign and looks to build on the confidence of his team with their progression all the way to possibly the final.

With most of their key players leaving to seek greener pastures, Grant has had to rely on relatively unknown players who are gradually establishing themselves in the team.

Arriving from Dwarfs, the former Stars striker, has so far built a solid defence with the likes of William Denkyi, Christopher Bonney and Mohammed Alhassan and a more cohesive midfield which has also made the attack look more purposeful, having scored in almost all matches played.

However, Grant’s impressive work so far will be sternly put to the test as they come up against an equally consistent team in Kotoko, with a line up without his dependable Alhassan who is on national duty with the Black Stars.

Having been Ghana’s only representative at the Confed Cup, failing to progress at the final group eliminating round, Akonnor’s Kotoko have shown such consistency and cohesion that they have many more positives to show for that.

In his team-building effort, Akonnor has managed to solve the defensive problem of his side and getting the attacking line to be effective.

Between the two, however, it is Coach Akonnor who will be under pressure to make his experience, as among the best on the local scene at the moment, count as he seeks to lead Kotoko back to another Africa campaign.

Understandably, both coaches have downplayed the intriguing clash ahead, preferring to focus on the task ahead of plotting each other’s downfall.

“The focus is not about me, but the team as we are keen to return to Africa. We are already out of the Second Tier which has cost us the chance to fight for a ticket to the Confed Cup so our focus is what we will do collectively to keep our dream alive in the campaign to return to Africa, Coach Kim Grant told the Graphic Sports when asked about the forthcoming clash against his friend.

Akonnor believes advancing in the Special Competition is a reflection of the steady progress his team are making and he is thus keen to get them to deliver.

“For us, our target is to go back to Africa in the coming season. Thankfully, we still have a chance with both tiers. However, the Champions League is what we have not done well in when we participated, so we will want to return to that competition and prove our worth. We will fight to claim that slot,” Akonnor also indicated.

With goalkeeper Felix Annan unavailable, Kotoko will look to Muntari Tagoe to man the post while the usual names of captain Amos Frimpong, Emmanuel Agyeman Badu, Abdul Ganiyu, Kwame Donsu and Songne Yacouba, among the list of consistent players, are the sure bets to line up in this battle.

Traditionally, Kotoko have played and fared more comfortably at the Accra Stadium in the past and are expected to play up that psychology as well.

However, Hearts are reclaiming their home invincibility and this will set the tone for the uncompromising battle that will see a fierce duel in defence, midfield and in attack.

Who wins this battle, the key rests with Grant and Akonnor, and how they plot their game plan within the 90 minutes.

We'll not accept the 4% salary increment — Coalition agains...
35 minutes ago