AFCON 2019: Felix Annan The Only Local Based Player In Ghana's 23-Man Squad For AFCON 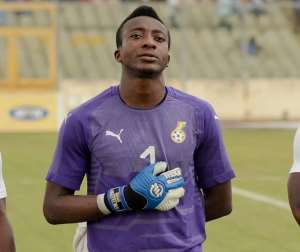 Felix Annan is the only locally based player who has been named in Ghana's final squad for the 2019 Africa Cup of Nations in Egypt.

The enterprising shot-stopper has been rewarded for his stellar performances for the Porcupine Warriors during their CAF Confederation Cup campaign.

Ghana, who finished fourth at the last edition of the AFCON after losing 0-1 to Burkina Faso, will be playing in Group F alongside Cameroon Guinea Bissau and Benin in the tournament that will kick off on June 21, 2019.

Below is the final squad list for the tournament;

Ghana will play their final preparatory match against South Africa South before jetting to Egypt for the tournament.

The Black Stars will play their first match on June 25 against Benin at the Ismailia Stadium.