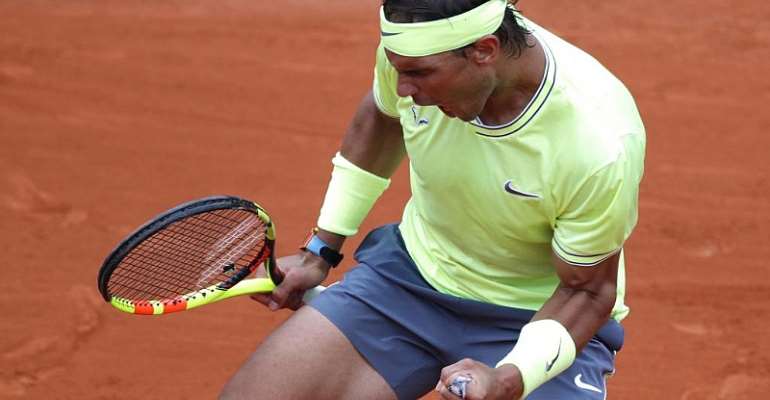 The king of clay put down the rebellion in 28 brutal minutes on Sunday afternoon at the Roland Garros stadium. Dominic Thiem had the temerity to win a set in the French Open final. No one had pulled off that feat against Rafael Nadal since Novak Djokovic in 2014.

Back then Nadal recovered from that first set deficit to take the next three and lift his ninth title.

In the 2017 and 2018 finals, neither Stan Wawrinka nor Thiem offered much resistance to the Spaniard. But in 2019, Thiem, feasting on memories from a win over Nadal at the Barcelona Open in April, rivalled the guile, intensity and power.

The 25-year-old Austrian fashioned the first break of the match to lead 3-2 but he immediately squandered his advantage. He cracked again when trying to level at 4-4.

At 5-3 up, Nadal gleefully accepted the invitation to take the first set after 56 minutes.

But as the second set seemed destined for a tiebreak, Thiem wrestled open two set points. He only needed one of them to win it 7-5. After one hour and 47 minutes, there was parity.

A compelling tussle was veering towards the landscapes of the classic.

Execution
What followed, however, in front of 15,000 fans on Court Philippe Chatrier, was a slaughter. Thiem harvested only one point as Nadal raced into a 4-0 lead. The axe man had come.

The bludgeoning of before had ended. Nadal won five points at the net and hit 10 winners to wrap up the set 6-1 and effectively terminate the match in those 28 transcendant minutes.

The level playing field had been a chimera. Thiem's aggression was answered with extreme prejudice.

“I played the first two sets very well and then I had a little drop,” Thiem conceded. “Against most players that is not that bad but Rafa took the chance and stepped right on me.”

And he stayed downtrodden. Nadal muscled his way to 3-0 in the fourth set and had three chances to lead 4-0 before Thiem held his serve to restore some respectability at 3-1. But Nadal, scenting a 12th title since 2005, dispensed with Thiem's dignity and charged on to win the fourth 6-1.

“It was a good level of tennis,” said Nadal. “It was a brutal first set and he was able to win the second. I think the beginning of the third set was the key.”

Hunt
His victory furnished him with his 18th Grand Slam tournament trophy and he moves to within two of Roger Federer's record haul of 20. Nadal, however, says he is not chasing such kudos.

“You can't be frustrated all the time because the neighbour has a bigger house than you or a bigger TV or better garden. That's not the way that I see life."

The 33-year-old added: "I just try to do my way and if, at the end of my career, I am able to win a couple more Grand Slams and be closer to Roger, that will be unbelievable. If not, still unbelievable.”

Following his latest adventures in Paris, Nadal will return home as a legend enhanced to store even more Roland Garros gold.