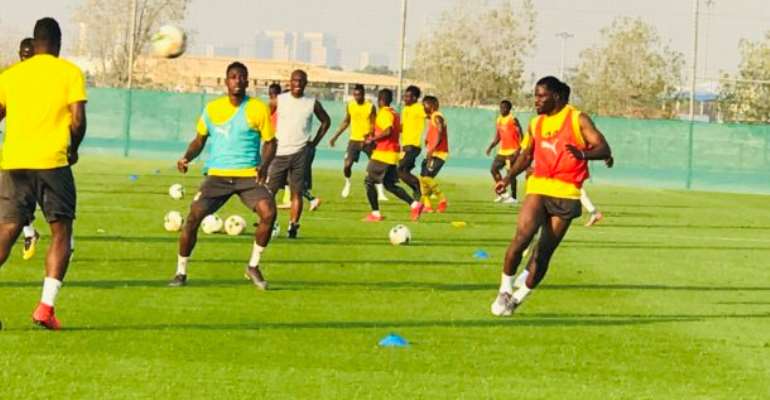 The Black Stars of Ghana on Sunday, June 9, were beaten by a lone goal by the Brave Warriors of Namibia in a preparatory match ahead of the 2019 Africa Cup of Nations (AFCON) tournament set to be hosted by Egypt later this month.

Ricardo Manetti’s men, happy to sit behind allowed the Stars to dictate the pace of the game whiles making sure they stayed compact and defended very well to deny their opponent from breaking down their backline.

Their resilience coupled with some attacking plays paid off for the Brave Warriors on the 35th minute after Black Stars goalkeeper Lawrence Ati Zigi failed to gather a shot.

A few minutes to end the first half, Ghana was awarded a penalty kick but midfielder Mubarak Wakaso stepped up but fired his shot into the crossbar leaving the Namibians to go into the break with a one-goal cushion.

Despite making changes to his starting line-up, the Stars failed to register any goal at the end of the full-time whistle as the Namibians walk away with what will be a morale booster ahead of the continental showdown.

With the 2019 AFCON set to kick start in 12 days, Ghana has been drawn Group F alongside Cameroon, Benin and Guinea Bissau.

For Namibia, they find themselves in Group D where they will come up against the likes of South Africa, Morocco, and former Champions Cote d’Ivoire.

The head coaches for both sides used the fixture to test the strength of their squad as they look to select the final 23-man team that will make their way to Egypt for this year’s prestigious tournament.

Ghana will engage South Africa in a final friendly match on June 15 before they depart for Egypt for the 32nd edition of Africa’s finest tournament.

Meanwhile, James Kwesi Appiah is expected to name his final 23-man squad for the tournament by close of Monday, June 10.

The tournament will commence from June 21 to July 19.

Akufo-Addo commences process to remove Anin-Yeboah over $5m ...
42 minutes ago