NC Competition: Kotoko To Face Hearts In Semi After Rescinding Decision To Withdraw 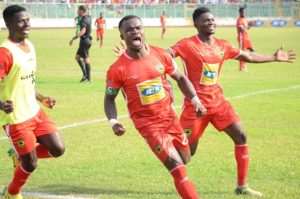 Asante Kotoko have backed down in their standoff with the GFA NC Special Competition Committee over the conditions over their scheduled semi-final against Accra Hearts of Oak.

The Kumasi club withdrew from the competition on Tuesday after the GFA refused to buck on its decision to stage the match at the Accra Sports Stadium, the traditional home ground of Hearts of Oak.

The game between Ghana’s two biggest was scheduled to take place on Sunday, June 16, 2019 in Accra but the Porcupine Warriors demanded that the tie should be played at a neutral venue or over two legs, a situation they feel will be fairer to both sides, both financially and on the pitch.

40% of the proceeds from the match were set to go to Hearts with the Normalisation Committee and Kotoko splitting the remaining 60%.

Kotoko believed that this was unfair, and called for all gate proceeds to be shared equally between the clubs.

However, in their response to Kotoko, the GFA NC Special Competition Committee said earlier that it could not “accede to their requests”, adding that the semi-final would proceed as scheduled.

The Committee also said that it could not change the disbursement formula for the sharing of gate proceeds.

Kotoko, however, had insisted they will not “succumb to any pressure” and “accept any decision bereft of any justice or fairness” in spite of its support for the normalisation programme.

“Management is of the firm conviction that the posture of the FA is not only disheartening but an impediment to proper planning and preparation ahead of the games.”

Management however wishes to reiterate that it would only accept the decision by the FA for the one-off semi-final match provided that it would be played on a neutral ground and the game proceeds shared equally between the two clubs.”

The club appears to have reversed its call and will now face Hearts in the semi on June 16 after a decision by the Committee to let the two clubs share 80% of the gate proceeds equally.

Hearts and Kotoko were paired in the semi after the Accra club finished top of Group B of the NC Special Competition Tier 1 while the latter were runners up to Ashgold in Group A.

The winner of the competition will represent Ghana in the CAF Champions League.