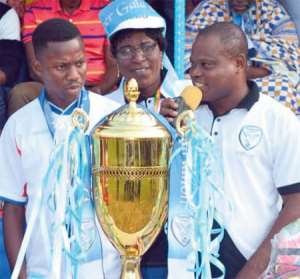 One hundred and four football clubs have registered to compete in the 2019 edition of the 'Duamenefa' regional tournament in Volta Region.

The competition, which is considered by many as the 'Olympic Games' of the Volta Region, is scheduled to begin today through to November 16 this year.

At stake is a trophy with special cash prices and other football souvenirs.

The 'Duamenefa' tournament was promoted to the regional status during the grand finale of the 2018 edition of the tournament by the Volta Regional Directorate of Sports of the National Sports Authority, in recognition of the professionalism and tact exhibited by the organisers, Fafaa 100. 3 FM, with its associate NGO, Duamenefa Foundation, for promoting peaceful coexistence.

Football talents were unearthed, with scouts such as FP Sports, and Opal Sports UK were on the ground to hunt for talents.

The Southern Volta Referees Association constitutes the official referees of the tournament.

The Regional Football Association (RFA) leadership was equally key in support of the tournament.

The potentials in the youth of the area have been displayed to the admiration of all and sundry and the dream of two among the lot were met as they have been selected by scouts to play for clubs in Portugal and Finland, while others among them were selected by the Volta Regional Directorate of Sports to be nurtured to the next level.

The tournament started in 2017 with 46 all-male teams and a marathon of 71 athletes competing in the race.

In 2018, the teams increased to 77 and marathon racers coincidentally were 77 in number too.

It was a great event that attracted dignitaries from the political class, the traditional authorities, as well as well-meaning stakeholders from all walks of life. Arthur Legacy is one of the sponsors of the tourney.