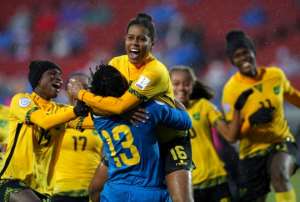 Cedella Marley, the eldest daughter of music legend Bob Marley, has played a key role in resurrecting the Jamaican women's soccer team after the country's federation cut the funding at the beginning of the decade.

Marley was upset when she saw a flier asking for donations to the Jamaican national team when her son brought it home from school in 2014.

"People were saying no to (the women), and it was for no reason," Cedella recalled in an ESPN story published Tuesday. "The more I got involved, the angrier I got."

Fast forward to 2019 and the Reggae Girlz are the first Caribbean team to compete in the World Cup, slated to begin this weekend in France. Their redemption story began with Marley spearheading the fundraising efforts and using her pull — as a top executive for her father's record label, Tuff Gong — to raise awareness for the women's group of pioneers.

Cedella donated her own money and helped the team raise hundreds of thousands of dollars, according to ESPN. She also released a song, "Strike Hard," with her brothers Stephen and Damian, and created a complementary Indie-gogo campaign.

Even with sufficient money and exposure in place, a key phase of the journey became challenging gender norms — the Jamaican men's team, the Reggae Boyz, have full funding and a more popular fanbase. The Jamaican federation cut funds from the women's team a second time in 2016, and Marley reignited her fundraising efforts once again. It was around that time that she found the team its head coach, Hue Menzies.

"That's just our culture," Menzies told ESPN. "If the Marley's are doing something, it's real."

All the while, the Reggae Girlz kept winning elimination games and defying odds. The biggest of which was the tournament that punched the team's ticket to the World Cup — qualifying at the CONCACAF Women's Championship back in October of 2018. In a match against Panama, with a World Cup trip on the line, the Jamaican women's team won in a shootout that saw Dominique Bond-Flasza make the game-winning goal.

Marley, watching the game from her garage, called the win an "out-of-body experience."

"It's a choice that the girls have made to play," Cedella said. "And we should give them an even field to go out and kick the ball.

"Football is freedom. That's a quote from Bob Marley."