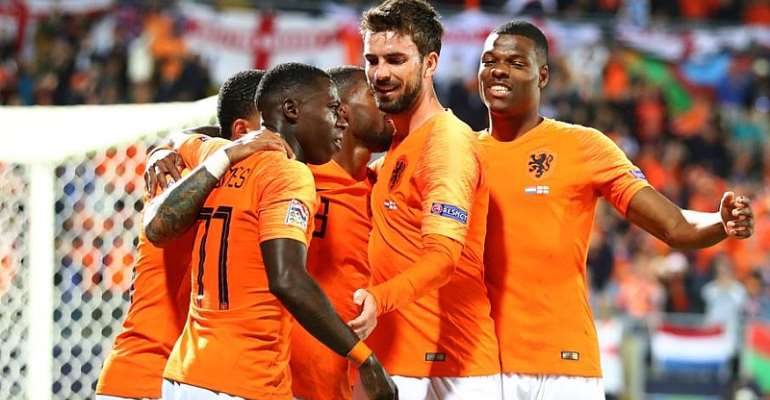 England's long wait for a trophy since 1966 goes on as the Netherlands set up a Nations League final meeting with Portugal on Sunday with a 3-1 win after extra-time in Guimaraes.

Marcus Rashford's penalty gave the Three Lions a first-half lead against the run of play, but Matthijs de Ligt made amends for his error in leading to the spot-kick to level 17 minutes from time.

Jesse Lingard thought he had won the game late on for England only for his strike to be ruled out for offside by VAR and the Dutch took full advantage of that reprieve to deservedly earn their place in the final.

England contributed to their own downfall with a comedy of errors for both goals in extra-time with John Stones and Ross Barkley at fault as Kyle Walker's own goal and Quincy Promes's tap in sent Holland into the final.

Gareth Southgate's men were attempting to build on the success of reaching a first World Cup semifinal for 28 years, but England were largely outplayed to show much work is still to be done if they are to end their trophy drought on home soil next summer at Euro 2020.

The Netherlands failed to even qualify for the last two major tournaments. However, the young talent that has seen a dramatic turnaround in their fortunes on the international stage was in evidence with Barcelona-bound Frenkie de Jong outstanding in midfield.

De Ligt also looks set to leave Ajax with a host of top European clubs after his signature, but he had a moment to forget just after the half hour mark.

The 19-year-old failed to control a simple pass and then chopped down Rashford in his attempt to recover.

With Harry Kane left on the bench by Southgate, Rashford took responsibility from the spot to send Jasper Cillessen the wrong way for a barely deserved lead.

Denzel Dumfries had to make a cleaner last-ditch tackle on Rashford moments later to avoid conceding a second penalty.

Rashford suffered an ankle injury in that challenge that forced him off at halftime as Kane was restored for the second period.

The Netherlands dominated possession throughout, but lacked a cutting edge up front with Memphis Depay particularly wasteful in front of goal.

However, the introduction off the bench of Promes and Donny van de Beek offered the Netherlands more dynamism and England were eventually punished for sitting deep when De Ligt made amends by powering home from a corner.

Van de Beek then missed a glorious chance to completely turn the game around.

Yet, just when there seemed only one winner, England produced their best move of the game as Stones, Ben Chilwell, Barkley and Raheem Sterling moved the ball from one end to the other before Lingard slotted home.

The celebrations were cut short, though, when the Manchester United midfielder was ruled offside by the finest of margins after a VAR review.

Depay blazed over another fine Dutch chance to win the game before extra-time, but the Netherlands finally took complete control in the extra 30 minutes.

England inflicted much of the damage themselves as Stones dallied on the ball and after Pickford made a great save to deny Depay, Promes's follow-up deflected in off Walker.

Barkley's underhit backpass then teed up a third for the Dutch as Depay squared for Promes to slot into an empty net.