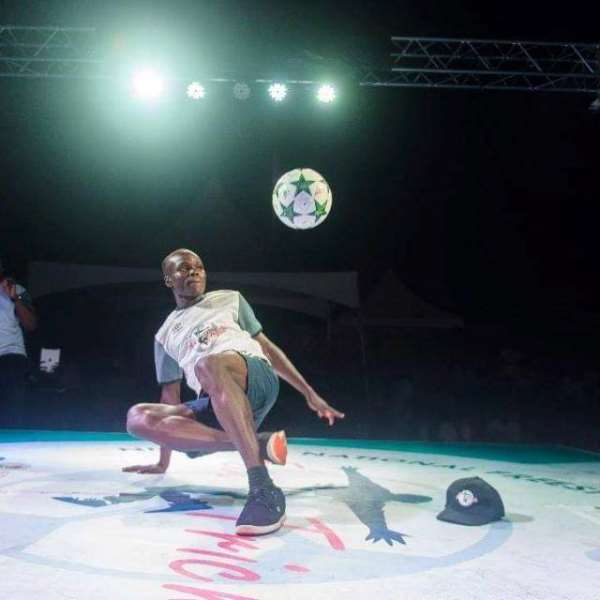 Ghana’s representative in Free Style Football at the upcoming first Africa Beach Sports Games in Sal, Cape Verde has promised to do his best to bring a medal home.

Speaking to Yours Truly before departure, he said this is his opportunity to be seen and known in Ghana and will make sure he comes back with a medal.

Joel Asare is a FREESTYLE Footballer who was born and bred at Teshie in Accra Ghana.

He is also a Committee member representing Africa at the World Freestyle Football Association (WFFA) and was a judge at the national championship of Nigeria in 2017.

Currently, he is in among the Best Top 16 in Africa at the 2018 ratings and wants to be the overall best.

According to Asare, he chooses Freestyle Football because he realised it was what he was created for.

“Like the name says, it gives you the freedom to handle the ball as you want. It helps express what you feel within you. You can do anything with the ball, without being pressured with rules. Freestyle Football is what I do professionally. My sponsor/manager is Lawyer Stephen Asante Bekoe and I'm positive I'll secure a medal for Ghana, with God on my side” he expressed.

“They should keep supporting freestyle football in Ghana and support freestylers instead of discouraging them by telling them to go into football for the money it provides. There's more pleasure in following your passion than doing things you're not passionate about for the money involved

My target in life is to build and promote freestyle football in Ghana and Africa and to be the best me I can be to inspire fellow Ghanaians and Africans to never give up on their dreams due to discouragement and pressure from family and society” he said.

Joel Asare is 23 years old and lives at Teshie. He attended Presec Teshie. His best subject is English.

His best love goes to his mother Miss Betty and his best vocation is Street soccer(football).

Football freestyle is his business for now and he wants to take it to the highest level.

Michryc is his favourite star and his best dish is Jollof rice, and any car that moves is his choice.

With the confidence and motivation seen on his face, he looks like coming home with a medal.