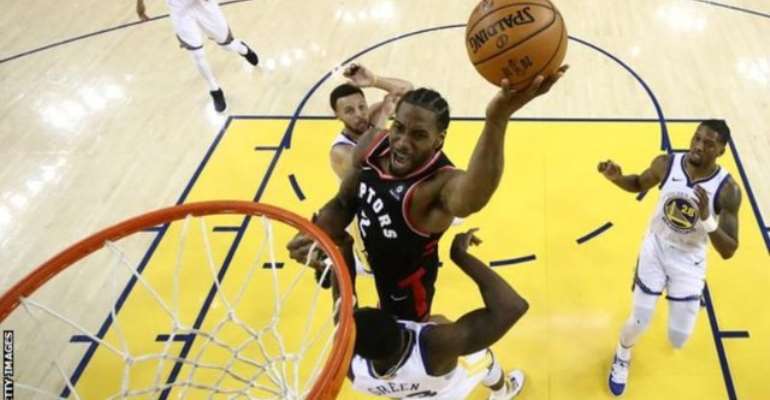 Kawhi Leonard scored 30 points as the Toronto Raptors beat reigning champions the Golden State Warriors 123-109 to take a 2-1 lead in the NBA Finals.

Stephen Curry's playoff career-high 47 points was not enough for the depleted Warriors, who were without the injured Kevin Durant and Klay Thompson.

The Warriors are attempting to win for the third season in a row, while the Raptors are in their first ever final.

Game four of the best-of-seven series is on Saturday in Oakland.

A man sitting courtside at the Oracle Arena was ejected for shoving Kyle Lowry in the fourth quarter after the Raptors player had fallen into the front row diving for a loose ball.

"There's no place for that," said Lowry, who scored 23 points - one of six Raptors players to reach double figures. "You know, he had no reason to touch me. He had no reason to reach over two seats and then say some vulgar language to me.

"There's no place for people like that in our league and, you know, hopefully, he never comes back to an NBA game."

Two-time NBA most valuable player Curry said the Warriors are "missing 50 points" with the absence of Thompson and Durant.

"We'll adjust," added Curry. "And it's a long series you know. It's going to be fun for us.

"We fought, but we lost. So we got to go back to the drawing board and just recalibrate for game four.

"We're going to compete no matter what happens, you can count on that.

"We have got to execute and play smarter and no matter who is out there on the floor, do what you got to do to win."