What Has Changed One Year After #12 Exposé? 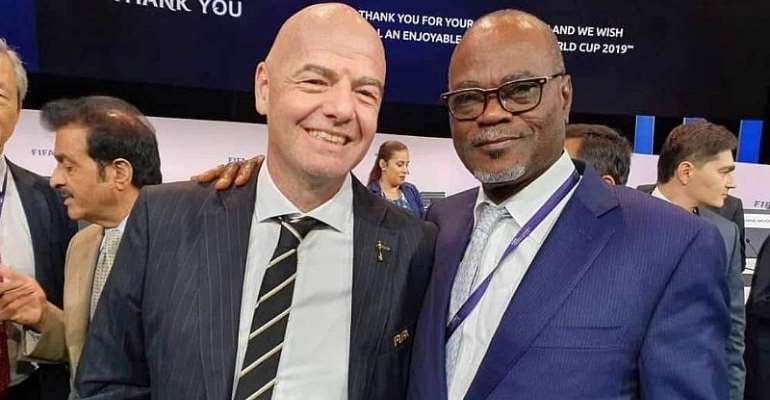 This week, I was pleased to see the former Ghana Football Association (GFA) President, Kwesi Nyantakyi, speaking in a video in which he was essentially thanking God for the ‘ill-fate’ he suffered after investigative journalist, Anas Aremeyaw Anas’s corruption exposé on Ghana football, dubbed #12.

The exposé not only untied Nyantakyi’s 13-year hold of Ghana football, it as well ended his life at top CAF and FIFA positions. My delight, upon seeing the video in question, stemmed from the genuine feeling that; a fellow human being has overcome an unpleasant life experience.

Brimming with hearty smiles, Nyantakyi’s sermon in this video, showed how he’s had faith in God (and you don’t have to share his religious persuasion or conviction to understand God’s power to heal pain and disappointment particularly when we yield to Him. You only have to be human and sensitive.

So, with today being exactly one-year #12 was aired; Nyantakyi, the chief character in the exposé, appears to have recovered. He seems to be doing well regardless of the ‘bad-fate’ #12 brought to his football life. I won’t pretend to know all he has experienced in the last one year but as human, I wish him well, purely out of compassion.

The question I ask now is: what has changed in Ghana football one year after #12? I watched the exposé. I have watched it three times since June 6, 2018. I have to reiterate my position on #12. First, it blew the lid on corrupt referees and how easy it was to influence them to bend rules, cheat and rob clubs in a game that has fair play as its trademark. The referees threw their professionalism to the dogs.

It didn’t have to take club officials to bribe referees before we would accept that, most of our referees were corrupt. Anas acted on deep suspicion, put out a test, which most of the referees failed. On Nyantakyi, if he was targeted by people who wanted him out, as his loyalists argue, I wouldn’t know but the mere fact that; he was ready to rip off an association he led and accepted gifts in breach of FIFA ethical codes were problematic.

I pray that, Nyantakyi’s appeal of the FIFA life-ban goes well but then, what has been well for Ghana football a year after #12? This question is relevant. We must find out what gains we’ve made after the corruption exposé. I didn’t expect an overnight clean-wash of the ‘dirty’ in Ghana football but I’m sorry to observe that, the plight of the country’s football is still the same if things haven’t worsened.

Indications of a promising future for Ghana football are too faint to see if not non-existent. Any reputation Ghana football had diminished with #12. Public confidence in referees is still at an all-time low. Violence still has a strong presence in our leagues with no serious approach of containing the canker.

Our leagues still lack sponsorship. Most clubs are still run poorly with no specific development plan. Player salaries remain meagre. We still play on bad pitches. Even the stop-gap special competition has been fraught with avoidable controversies over money, fixtures, regulations and boycotts. What’s more, the Normalisation Committee hasn’t given good signals that the problems of Ghana football, and some of which were used against the past administration, will be eliminated or minimised to negligible levels.

I say, I didn’t expect an overnight clean-wash of the ‘dirty’ in Ghana football but signs of a better future for the country's football are weak, one year after #12. I’m for reforms that will tackle head-on, the problems #12 exposed; those that we already knew; like violence, bad pitches, no sponsorship, weak managerial structures at clubs, etc. But, one year on after #12, there’s been nothing new.

For me, until a substantive football administration takes over with serious plans for the future and work toward that, Ghana football will still be on life-support.