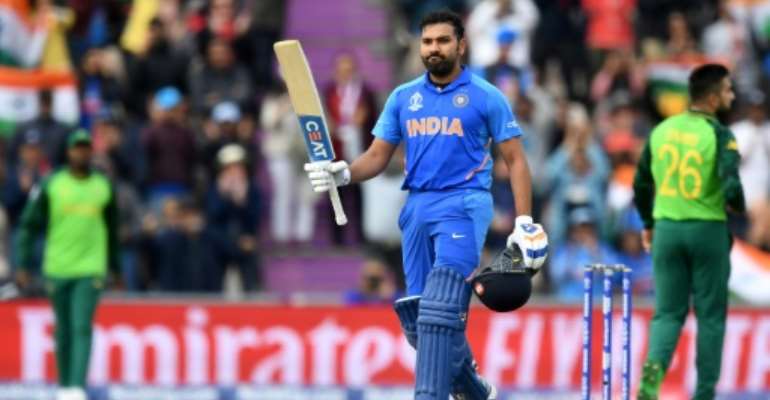 Rohit Sharma hit an unbeaten century as India made a comfortable start to their World Cup campaign with a six-wicket win over South Africa in Southampton on Wednesday that dealt a fresh blow to the Proteas' tournament hopes.

Chasing a modest 228, India cruised to victory on the back of Sharma's 122 not out as they won with 15 balls to spare and live up to their tag as one of the favourites for the showpiece event.

For South Africa, a third straight defeat in as many matches this World Cup left their hopes of qualifying for the semi-finals on a knife edge.

Fast bowler Jasprit Bumrah and leg-spinner Yuzvendra Chahal laid the platform for victory as India restricted an injury-hit South Africa to 227 for nine in 50 overs.

Chahal returned figures of 4-51 after Bumrah did the early damage by dismissing both South Africa openers.

Sharma, who survived a dropped catch on one by South Africa captain Faf du Plessis at second slip then anchored India's chase in measured fashion

'Got the job done'

"I couldn't play my natural game, you have to see what the ball was doing, certain shots I love to play I had to cut down and try to leave as many balls as possible," said Sharma of his relatively sedate 144-ball knock.

"It was overcast...I had to play out the overs and make sure I got the job done."

South Africa quick Kagiso Rabada struck early with the wicket of Shikhar Dhawan for eight but his team was short on runs to put pressure on the opposition batting.

Wicket-keeper Quinton de Kock came up with a stunning catch behind the stumps to send back India skipper Virat Kohli for 18 off Andile Phehlukwayo -- the first time in three World Cups the star batsman had not started the tournament with a hundred.

Sharma kept the chase on course, building partnerships that included an 85-run third-wicket stand with KL Rahul, who made 26.

The opener's well-judged mix of caution and aggression saw him reach his 23rd one-day century with a single off Tabraiz Shamsi, with Sharma hitting 13 fours and two sixes in total.

Sharma survived another reprieve on 107 after David Miller dropped a high but routine chance at cover to sum up South Africa's sorry performance so far before Chris Morris held a consolation caught and bowled chance, despite treading on the stumps at his end, to dismiss MS Dhoni (34). 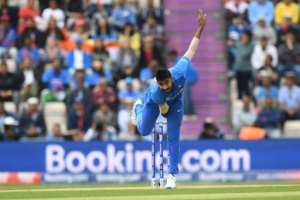 Earlier, Bumrah, the world's top-ranked ODI bowler, had the ball darting around on a cloudy morning, openers Hashim Amla (six) and de Kock (10) both falling to slip catches off his bowling.

Chahal soon took charge as he bowled Rassie van der Dussen for 22 with the first ball of his second over to end a 54-run third-wicket partnership.

He then bowled skipper Du Plessis for 38 later in the same over.

Morris, batting at No 8, provided late spark with his fighting 42 during an eighth-wicket partnership of 66 with Rabada, who made an unbeaten 31 -- his highest ODI score.

South Africa have been hit by a spate of injuries, with pace spearhead Dale Steyn making an early exit from the tournament without playing a game.

India next play Australia at the Oval on Sunday while South Africa take on West Indies on Monday.