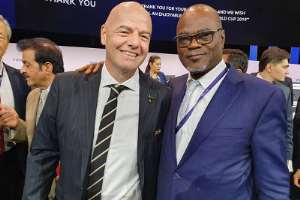 The chairman of the Normalisation Committee of the Ghana Football Association (GFA), Dr Kofi Amoah, has congratulated FIFA President, Gianni Infantino, on his re-election at the 69th FIFA Congress in Paris on Wednesday till 2023.

After succeeding Sepp Blatter in 2016, Infantino has overseen drastic changes to global tournaments like the World Cup, whilst he has also proposed plenty of other alternations to club competitions.

The three NC members are scheduled to meet FIFA on Thursday to conclude discussions on the revised GFA Statutes.

During his time in charge, Infantino finalised plans to expand the 2026 World Cup from 32 teams to 48, although his efforts to implement that change in 2022 were rejected in May amid fears it would require a second host nation.

The forty-nine-year-old has also pushed to turn the Club World Cup into a 24-team competition which would take place every four years. Whilst FIFA may have approved his plans, many of Europe's top sides have threatened to boycott such a tournament, with current ​Champions League holders ​Liverpool one of ​several sides to suggest they would decline to participate.