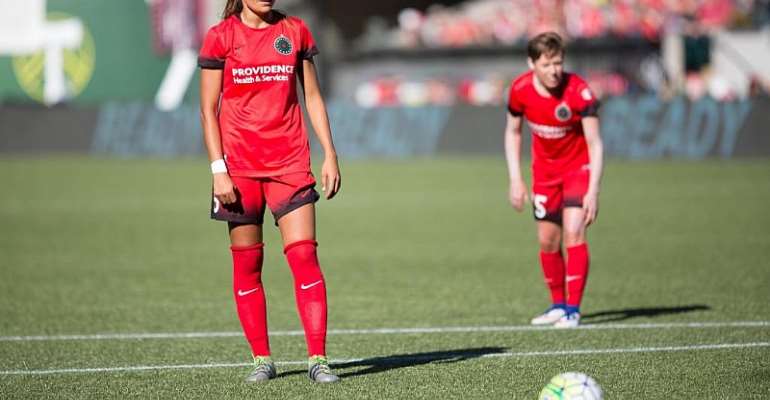 Nadia Nadim has become one of Paris Saint-Germain's star players this season after leaving Manchester City. She and her family fled the Taliban in Afghanistan and were refugees in Denmark where Nadia's football career began.

Loud applause breaks out after Nadia Nadim shares her remarkable story with the audience at UNESCO's headquarters in Paris. She is one the panellists for the #ChangeTheGame conference organised by the UN body to call for greater equality for women footballers.

Born in Afghanistan, Nadim learned to play football with her father behind the high walls of their family compound. It was frowned upon for women and girls to play football then. Now they risk being killed by Islamic extremists. Nadim's father was murdered by the Taliban. She and her family fled to Denmark.

“I first saw girls playing football in a refugee camp in Denmark. That's when I decided to make football my life,” Nadim says on the sidelines of the event. After applying for Danish nationality at 18, she was selected to play for the national team. But Nadim's fight for equality was by no means over.

Fighting for equality
“We went on strike during the World Cup qualifiers last year to demand equality with the male players,” Nadim explains. This led to the match with arch rivals Sweden being cancelled, and under UEFA rules Denmark lost and subsequently came third in their group behind The Netherlands and Sweden.

The Danish women's team are still paid less than their male counterparts despite last year's strike action. Only a handful of teams play their female players the same as the men. These include Canada, Norway and most recently South Africa. The US women's team is currently suing the country's football federation in a bid to obtain equal pay.

The situation is similar on the club circuit, but still Nadim is “happier than ever” at Paris Saint-Germain. The 31-year-old striker joined the club in January after two seasons at Manchester City. She is among a growing number of professional players who make a living from football in France.

Nadim plans to spend the summer perfecting her French. She also speaks Arabic, Danish, Dari, English, German, Hindi, Persan and Urdu. The legacy of her early years in Afghanistan, teenage years in Denmark and adult life as an international football player.

W/R: Five wounded after residents of Ampatano and Kamfakrom ...
7 minutes ago