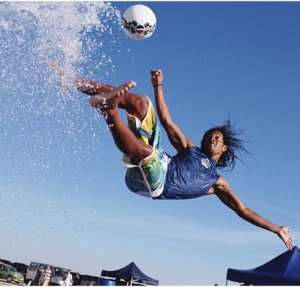 Teqball has been announced as part of the programme for the first-ever African Beach Games on the island of Sal in Cape Verde, from 14 – 23 June this year, with a special appearance from global football superstar Ronaldinho.

The West African archipelago will play host to the African Beach Teqball Cup, a doubles tournament comprising 12 teams including special guests Ronaldinho and female doubles partner Natalia Guitler representing Brazil. The pair will take part in the group stages only, as part of a demonstration team to showcase the growing sport.

African athletes have already demonstrated their talent and skill with strong performances at other international Teqball events including the 2nd Teqball World Cup in Reims, France last year. There Cameroon, Morocco and Algeria competed in a pool of 42 countries, with the latter two progressing to the final 16 in the doubles event. June’s African Beach Teqball Cup will be contested by teams from Tunisia, Morocco, Algeria, Cameroon, Senegal, Egypt, Madagascar, Ghana, Nigeria, Mauritius and Cape Verde, over two days from Monday 17th June to Tuesday 18th June.

A partnership with Ronaldinho was announced this year, which saw him join other football legends in promoting the sport. The former Brazilian attacking midfielder has become a big fan of Teqball since retiring from professional football, regularly seen playing at his home and on the beaches of Rio de Janeiro where he now lives.

Less than 30 days before the biggest sporting event to take place in Cape Verde, the African Beach Games count on a retinue of around 1000 athletes representing the 54 countries of Africa in 11 modalities destined to be played from the 14th to the 23rd of June, on the Santa Maria, Sal Island.