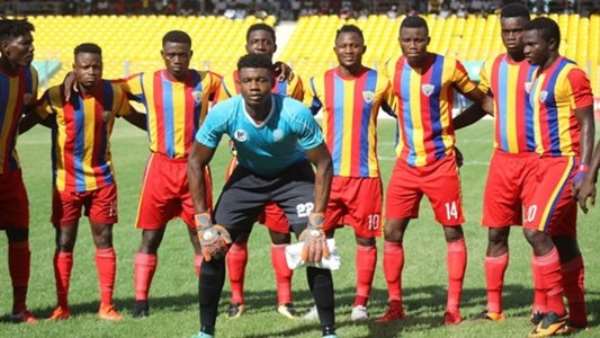 Hearts of Oak have been dumped out of the NC Special up Tier II at the round of 16 stage after losing to Unistar Academy at the Accra Sports Stadium on Sunday.

The Division One league side won the match 5-4 on penalties after 1-1 scoreline in regulation time.

The Rainbow club had taken a first-half lead through striker Kwadwo Obeng Jr after some dominant football in the first half.

Hearts could have finished the first stanza with two or three goals but misses from Joseph Esso and Fatau Mohammed kept the score at 1-0.

Both sides returned from the half with renewed energy as the Phobian kept on probing for a cushion goal.

However, it was Unistar Academy who will have the last laugh Joshua Jesse scored in injury time to send the game into penalties shootouts.

The two teams were perfect from their first four penalties but Aminu Alhassan's spot kick and the Phobians fifth was well saved by Unistar goalkeeper Peter Onyame to send the Unistar into the quarterfinals.

Elsewhere in Dansoman, another Premier League club, Liberty Professionalssuffered a shock exit at the hands of the second-tier club Proud United.

The Scientific Soccer Lads were beaten 4-2 on penalties.

But Asante Kotoko avoided a setback as they overcame a stubborn Nkoranza Warriors side thanks to a last-gasp strike by Augustine Sefa.

Veteran midfielder Daniel Nii Adjei netted to give Kotoko the lead on the stroke of halftime.

Two minutes after recess, captain Amos Frimpong failed to double the lead as his penalty was saved. Nkoranza equalised through Kwadwo Poku a minute later.

The scoreline remained 1-1 until the 90th minute when right back Augustine Sefa lobbed the ball over an opponent, teed himself up with lovely touch and then fired a missile into the left bottom corner to send Kotoko through.