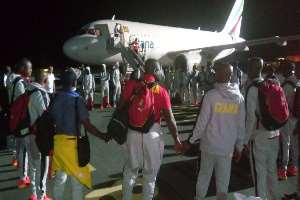 According to an official communique from the Ghana Football Association, the first batch of the Black Stars squad have arrived at the team’s base in Abu Dhabi ahead of the planned pre-tournament tour in preparation towards the 2019 African Cup of Nations (AFCON) tournament later this month.

An article posted on the football association’s official website indicates that “A contingent led by the Acting GFA General Secretary Mr. Alex Asante which included some players and members of the Technical team arrived in Abu Dhabi on Sunday morning”.

Meanwhile, the rest of the squad are expected to arrive in the team’s camp on Monday morning as Coach Kwesi Appiah looks to trim down a 29-man provisional squad to a final 23 for the continental showpiece.

The team is expected to stay in the United Arab Emirates (UAE) for the next three weeks. The training tour will see them playing two friendly matches against Namibia and South Africa on June 10 and June 15, 2019, respectively.

Ahead of the prestigious tournament, the Black Stars of Ghana has been pitted in Group F alongside Benin, Guinea Bissau, and defending champions Cameroon.