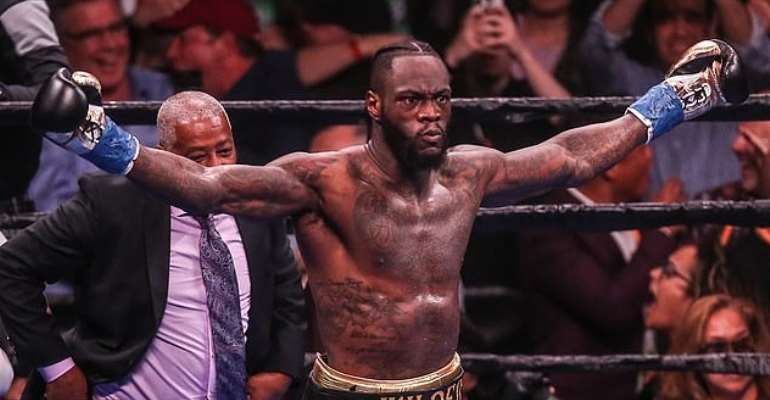 Taking to Twitter following Joshua's unexpected loss, Wilder wrote: 'He wasn’t a true champion. His whole career was consisted of lies, contradictions and gifts. Facts and now we know who was running from who!!!!'

Wilder already has his next bouts lined up and neither included an eagerly-anticipated bout with the Briton.

The Alabama-fighter takes on Luis Ortiz in a rematch later this year before a second rematch follows with Tyson Fury in 2020.

It had been expected that calls for a unification bout between Wilder and Joshua would grow with a comfortable victory over Ruiz Jnr but it never transpired; a shock defeat instead was the script for MSG.

Joshua was rocked like many have never seen before in his illustrious career and was sent to the canvas as Ruiz Jnr unloaded punches.

He recovered, before hitting the canvas again and the bell came at a vital time to save him and get him safely back to his corner.

But one minute and 27 seconds into the seventh round his recovery ran out of steam and the fight was waved off - sending Wilder and other Joshua critics into a frenzy online.

Fury, who has also been chasing a fight with AJ, was much more gracious giving his take on his British compatriot's worst moment in his professional career.

He wrote on his Twitter page: 'We have our back and Forth’s but @anthonyfjoshua changed his stars through life. heavyweight boxing, these things happen, rest up, recover, regroup and come again.'