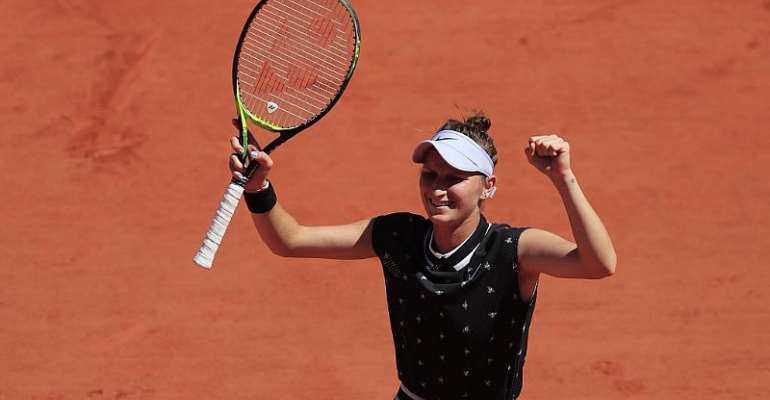 Marketa Vondrousova swept into the last eight at the French Open on Sunday with a 6-2, 6-0 destruction of Anastasija Sevastova. The unseeded Czech 19-year-old dispatched the 12th seed from Latvia in 59 minutes to reach the quarter-final of a Grand Slam event for the first time.

She will play another Grand Slam quarter-final debutante Petra Martic. The 31st seed came from a set down to beat Kaia Kanepi from Estonia 5-7, 6-2, 6-4 after two hours and 12 minutes on centre court.

Johanna Konta's remarkable run at the French Open continued on Sunday. The 28-year-old from Britain had never won a match in Paris in her four previous visits. But the 26th seed claimed her fourth in 2019 with a 6-2, 6-4 victory over the 23rd seed Donna Vekic.

"I feel very fortunate'to be able to win a match like that against a tough opponent in front of a crowd like this," she told the on-court interviewer Marion Bartoli. "It gives you goose bumps."

She secured a double break in the opening set and claimed it 6-2 in 39 minutes with her third ace.

Konta broke to lead 4-3 in the second set but from 40-15 she allowed Vekic to claw her way back into the game to level at deuce. Konta fluffed another chance to extend her lead to 5-3 before being reeled in. Vekic exploited her first break point of the set to level at 4-4.

But the Croatian mirrored Konta's munificence with an equally shaky service game. She coughed up three break points and though she saved two, a Konta backhand drop shot yielded the break and the chance to serve for the match at 5-4. She closed out confidently without dropping a point.

"We've had a number of great battles," added Konta. "But this was our first on clay. She beat me the last two times we played so I tried to remember the good things I did in those matches and keep my perspective."

Konta will play either last year's runner-up Sloane Stephens or the 2016 champion Garbine Muguruza for a place in the semi-final.