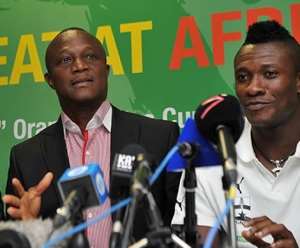 Reports say the Kayserispor forward who rescinded his decision not to ply for the Black Stars over captain's armband is remorseful now and ready to smoke the peace pipe with Coach Kwesi Appiah.

Gyan tried to reach Coach Appiah via telephone unsuccessfully before coming out publicly to rescind his decision to retire from the national team on Wednesday according to sources but later followed up the call with a text message, indicating his desire to meet him on arrival in the country on Monday after featuring in Kayserispor’s last league match against Büyüksehir Belediye Erzurumspor on Sunday.

Kayserispor are placed 11th on the Turkish Super Lig table, while their opponents are 17th in the 18-club league and are threatened by relegation.

The 33-year-old was impressed upon by President Nana Akufo-Addo to reconsider his decision via telephone after receiving a briefing on the captaincy brouhaha from Coach Kwasi Appiah at the Jubilee House last Tuesday.

The President’s invitation of Kwesi Appiah followed the confusion which erupted after Gyan’s decision to retire from the national team on Monday after Kwasi Appiah had informed him of his decision to make him the general captain and appoint Andre Ayew as the new captain of the Black Stars for AFCON 2019.

Gyan has been named in Black Stars for Africa's finest tournament in Egypt.

Ghana are expected to camp in Dubai for two weeks where they will play South Africa and Namibia in a friendly.