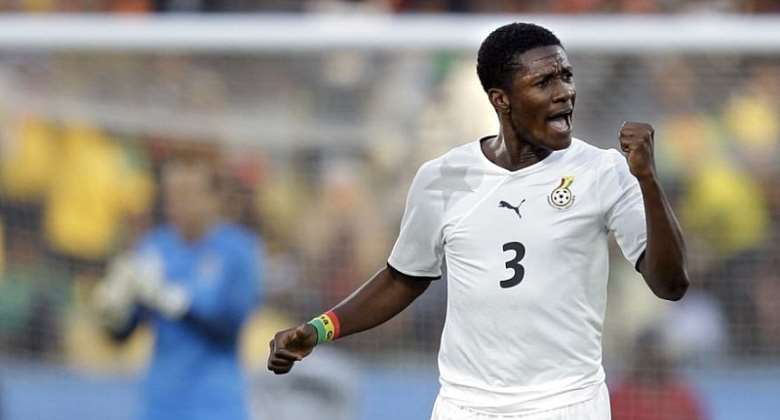 Over the course of the twelve years since making his debut for the Black Stars Asamoah Gyan’s infamy for the occasional heartbreak moments is only overshadowed by his knack for scoring critical goals for Ghana. His place in the history of Ghana football is entrenched forever but has he left no one in doubt that he is the greatest Striker to don the Black Stars jersey?

Gyan scored against eventual winners of the 2014 World Cup, Germany

He may not have had a stellar record at Club football like contemporaries Didier Drogba or Samuel Eto’o but for the National team, Gyan has been immense. After all he is the national team’s all-time top scorer, the first Ghanaian to score at the World Cup, the Ghanaian with the most World Cup goals and joint top scoring African at the World Cup and Ghana’s second highest scorer at the African Cup of Nations with 7 goals (one behind Wilberforce Mfum).

Gyan’s dramatic strike at the death against Algeria on Friday night, almost out of nothing, typifies the best of the goals he has scored down the years. Asamoah’s sixth consecutive scoring match for Ghana on Friday masked the Black Stars’ inadequacy and dependency on their captain for cutting edge. Great players have a way of carrying teams, sometimes single-handedly.

This was one such occasion. So on a day when this whole page will not be enough to highlight the weaknesses in the current Black Stars set up; let’s celebrate the man who braved malaria to rescue Ghana again and keep the nation in Afcon 2015.

Here’s a selection of five of the best Gyan rescue goals for the Black Stars.

Ghana went into this tournament with a thoroughly depleted squad. Essien, Muntari, John Mensah and Stephen Appiah were all absent leaving Gyan and Richard Kingson as the leaders on the field surrounded by young players. Like Afcon 2015, Ghana started with a defeat, and despite scraping into the last eight was expected to come unstuck against the powerful hosts-Angola.

16 minutes into the quarterfinal match Gyan scored a goal quite similar to the one against Algeria. a defence-splitting pass by Kwadwo Asamoah from inside his own half picked out Gyan on the right and the striker fired an 18-yard cross-goal shot beyond Carlos Fernandes to stun the near 50,000 crowds at the Estadio do Novembre 11 in Luanda and march Ghana into the semi-finals.

Any match against the friendly Enemy is one to savour. But despite Ghana’s unexpected semifinal appearance, against this full strength Nigerian side very few gave the Black Stars a chance. And for most of the game, the Ghanaians were on the back foot.

Cue in a 21st-minute corner kick: Kwadwo Asamoah measured a delicious delivery and Gyan sneaked in at the near post to nod in and put Ghana ahead against the run of play. The Super Eagles enjoyed long periods of possession and created the best chances but Ghana held firm to book a final date against Egypt.

South Africa 2010 was an Asamoah Gyan tournament for the right and wrong reasons. This was one of the right reasons. Ghana went into the game against Serbia against the backdrop that none of the other African Countries had won their first-round games.

Gyan’s penalty goal against Serbia at the World Cup

Ghana was a huge underdog against the Europeans. The Serbs struggled to contain Ghana’s dominance in midfield and their task was made even more perilous when defender Aleksandar Lukovic was red carded for his second bookable offence in the 74th minute.

In the 85th minute Serbian substitute Zdravko Kuzmanovic was penalised for handball while attempting to clear a dangerous cross. Asamoah Gyan stepped up and duly dispatched the Kick to give Ghana its only group stage win and the springboard to the 1/16 stage.

Up to this stage, all Gyan’s scoring heroics had come from penalty spot as Ghana faced the USA in a replay of the 2006 final group stage match. The Americans pegged back Ghana after Kevin Prince Boateng had put the Black Stars ahead and dominated most of the game.

Gyan celebrates after scoring against the US
With the teams tied at one all after normal time, the game was pushed into extra-time. In the third minute of extra-time, a hopeful punt from defence found Asamoah Gyan who despite being sandwiched between Carlos Bocanegra and Jay DeMerit and almost losing his balance showed great upper body strength and composure to control a long ball forward with his chest and bury his strike from a wide angle. Ghana became the 3rd African country to reach the World Cup quarterfinals.

They still say at Wembley that this game produced one of the most exciting crowds to ever fill the new Wembley Stadium. This might have just been a friendly but it counts as an important match in Ghana’s history because of the opposition.

England led through Andy Caroll and though the Black Stars created some chances, it looked like they were going to lose by a lone goal. However, in the 91st minute up stepped Asamoah Gyan fashioning space for himself in the England box before lashing the ball beyond Joe Hart to bring the entire 80,012 crowds onto its feet.

What are your favourite Asamoah Gyan goals if any? Is Gyan Ghana’s greatest striker?