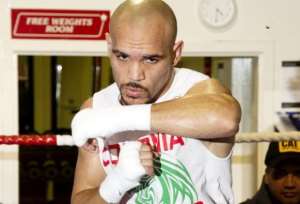 Commey, who took the title after knocking out Russian Isa Chaniev come up against a formidable opponent who was a former world champion and once held the WBO lightweight crown.

In the build-up to the fight, Graphic Sports takes a look at Beltran, a veteran fighter who holds 36 wins, eight (8) losses and a draw from 45 professional bouts.

The 37-year-old Mexican boxer remains a notable name in the lightweight division, having fought for four world championships and winning once in the process.

His big win came via a majority decision victory over Paulus Moses in February last year, when he defeated the Namibian [ the boxer who recently lost to WBO Africa championship to Ghana’s Emmanuel ‘Gameboy’ Tagoe in Accra last February] to win the vacant WBO lightweight strap.

Prior to the win against Moses, Beltran’s attempt to annex the world titles had been in tatters, having drawn Ricky Burns in 2013 and lost to Terrence Crawford in 2014.

After his win over the Namibian, Beltran could only hold on to the belt for five months as he lost a unanimous decision to Puerto Rican Jose Pedraza.

The veteran pugilist whose professional debut in the sport dates as far back as 1999 is coming into the Commey bout on the back of a ninth round stoppage win over Hiroki Okada, and the June 28 bout could be his final attempt at winning another world title.

Sensitize School Children On Wearing Face Masks Before And A...
2 hours ago