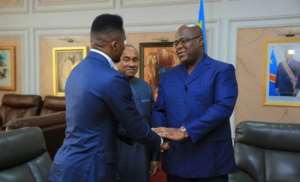 The leader hosted the Caf head on the latter’s first visit to the country since he assumed responsibility of steering African football in the right direction.

As reported by Afrique sur 7, Ahmad and Eto’o were joined by Caf’s vice-president Constant Omari, who also acts as the president of DR Congo Football Association as the continent’s representatives to the visit the African leader.

President Tshisekedi is a known supporter of the beautiful game, and the Caf supremo’s courtesy visit was an attempt to encourage the development of football in the country.

Since assuming office in 2017, Ahmad has sought to quicken the growth of the game on the continent, while seeking to build a working relationship with various Heads of State.

DR Congo are set to feature in the upcoming Africa Cup of Nations in Egypt, where they’ll be making their 19th appearance.

The Leopards, who boast stars like Cedric Bakambu and Yannick Bolasie, were drawn in Group A and they’ll begin their Afcon journey against Uganda on June 22, before facing the Pharaohs on June 26.

The two-time champions face Zimbabwe on June 30 to wrap up the group phase.