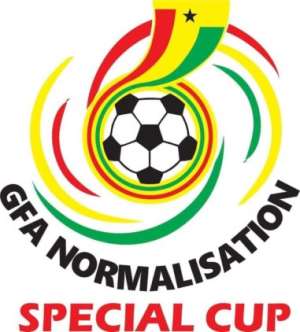 The GFA Normalization Committee (NC) Special Competition will enter week 13 this weekend with all matches slated to be played on Sunday, May 19, 2019.

All 14 teams from the top tier are looking forward to completing the first phase of the competition on a high in a bid to move into qualification spot to ensure they move into the knockout stage.

With the stakes very high ahead of the final two matches, upcoming games this weekend promises to be much tougher and intense. In the Premier Division A division, 4 teams stand the chance of making it to the knockout stage but will have to work for the 6 maximum points up for grabs in order to either finish in 1st or 2nd place.

Elsewhere in Division B, Hearts of Oak has already booked their qualification with 2 games to spare but insists they will want to win the remaining matches. Karela United, WAFA and Elmina Sharks are all in a good position to join the Phobians as the other team to qualify from the division.

The biggest match of the weekend in this review will be played at the Baba Yara Sports Stadium where Asante Kotoko will clash with table-topping Medeama SC. Just a point separates the Tarkwa based side and 2nd placed Porcupine Warriors. Even with that, the Reds need to win this encounter to have any chance of progression.

In the other two matches, in-form Obuasi Ashanti Gold could move a step closer to qualifying from the division if they are able to beat their week 13 opponents, Bechem United.

Then at Nkoranza Park, Techiman Eleven Wonders are set to host Dormaa based Aduana Stars in what will ultimately determine the ‘Fire Boys’ fate as far as the competition is concerned.

Then in the Premier B division, already qualified Hearts of Oak will be looking to beat Elmina Sharks at the Accra Sports Stadium having suffered a 1-0 loss the first time the two teams met in the competition. Sharks have a slight chance of advancing to the next phase of the competition but must ensure they amass all 3 points first.

At the CAM Park in Anyinase, impressive Karela United will be hoping to bounce back from their midweek defeat to the Phobians and get a positive result over Dreams FC who has revived their campaign following the departure of head coach Juha Pasoja.

Ebusua Dwarfs will also be in action this weekend even though they do not have any chance of progressing from the preliminary stage. They will play Dansoman based Liberty Professionals who need the 3 points badly to make a claim for the second qualification spot.

In the last match of the match day, 7th placed Inter Allies who have been poor since the start of the competition will have the chance to appease their fans when they host WAFA at the Tema Sports Stadium.

Hearts of Oak vs Elmina Shark