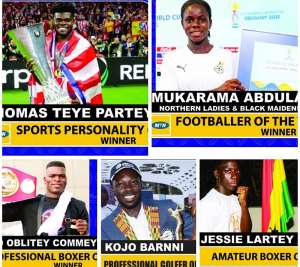 The 44th edition of the Sports Writers Association of Ghana (SWAG) awards ceremony was held on Saturday, May 11, 2019, at the Accra International Conference Center (AICC) with several sports personalities taking home honours.

Black Stars and Atletico Madrid midfielder emerged as the highlight of the night winning the topmost award. He beat Black Stars great Tony Baffoe and Former WBO Bantamweight Champion Isaac Dogbe to win the Sports Personality of the year award.

The footballer was additionally adjudged the men’s footballer of the year following his impressive stint with both club and country throughout the year 2018.

Below is the full list of winners on the night:

Athlete of the Year - Janet Amponsah

Coach of the Year - Boakye Danquah

National Team of the Year - The Eagles (Rugby)

Prospect Of The Year - Hor Halutie

E-levy has been approved, we just need backing legislation –...
25 minutes ago