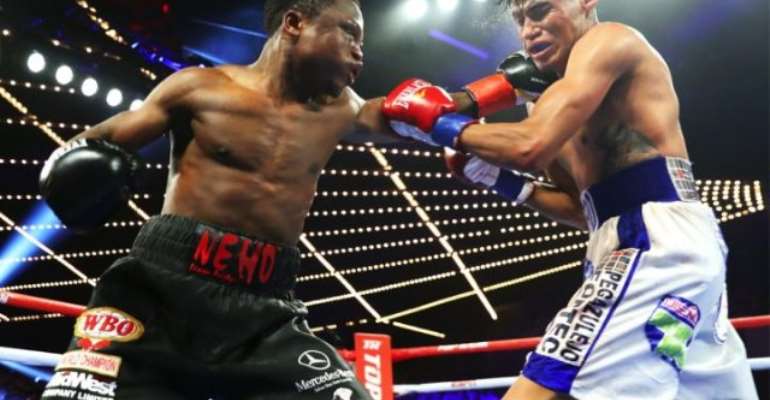 It wasn’t a lynching.
But it was a lesson in boxing delivered ruthlessly by Emanuel Navarette. No prisoners taken, no mercy shown.

Isaac Dogboe’s face served up a reminder of what you don’t do in boxing - underestimate any opponent. His face after 12 one sided rounds, last December, told the story of a fighter who had been through hell and escaped with nothing more than a moral victory.

He mustered a few shouts of his signature ‘Neho’ in the post-fight interview, but it lacked the verve with which it had been delivered pre-fight. Or, indeed, in previous fights when he had emerged victorious.

He had lost his title in a beat down not seen of a Ghanaian world champion in nearly three decades.

Eight months earlier, in Philadelphia, the Royal Storm served notice of his world championship credentials, dazzling and dethroning Jessie Magdaleno via an 11th round stoppage. He was confident Magdaleno would be no match, and he proved it, but not until he had weathered the storm of the first two rounds. He went down in the first round and found himself in trouble in the second. That was as good as Magdaleno was until the fight was stopped by referee Benjy Esteves Jnr.

Styles make fights
Dogboe is built to knock out opponents. His game plan can generally be summed up in a few words…’go out there and knock him out’.

He’s a pressure fighter who wears down opponent with body punches with the aim of taking them out in the mid to later rounds. His jab is not great, and doesn’t look like his weapon of choice.

14 of his 20 victories have come via knock outs.
He has power, he knows it and he uses it perhaps to a fault. Pressure bursts pipes, and many fighters fold under the pressure of a constant attack as witnessed in the Magdaleno fight, but what happens when two pressure fighters clash?

The question was answered when the then Ghanaian world champion came up against Emanuel Navarrete.

As impressive as Dogboe was, the Magdaleno fight revealed weaknesses in his repertoire despite the American’s inability to exploit it.

Victory made nonsense of any talk of weaknesses. He had won the fight via a TKO. How could anyone possibly question his style and technique?

But they were there, at least up until he succeeded in slowing down Magdaleno with huge amounts of body punches. His penchant for leading attacks with his head had him down in the first round.

It had him in trouble again in the second round. To his credit he rallied and got the job done, and looked good in the process. His next challenger Hidenori Otake was never going to cause him any problems.

The Japanese had zero movement and an equal amount of power and skill. He was a stationary target which suited Dogboe’s style. It was a fight that merely served the purpose of adding more gloss to Dogboe’s fight record, and with the benefit of hindsight a poor preparatory bout for the Navarrete showdown.

The Mexican utilized his size to devastating effect and put Dogboe’s style to the test or rather executed a better version of the pressure fighting style.

Game plan and adjustments
Boxers go into fights with a game plan but the very best adapt and make adjustments in the course of the fight to win. Having a plan is rarely enough and Mike Tyson sums it up quite brilliantly…”everyone has a plan until they get punched in the mouth”.

The plan was to knock out their Mexican opponent but it was clear by the fifth round that it wasn’t going to happen. He required a plan B but there was none. He had run out of ideas and so had his father and trainer Paul.

When plans fail adjustments must be made but the Ghanaian is not wired to make adjustments. His preparation clearly stopped at executing a game plan. The Royal Storm sighted inadequate preparation and the disrespect of underestimating his Mexican opponent as reasons for his inability to execute his game plan.

It may be true but what cannot be denied is the fact that when the two pressure fighters clashed, the sheer disparity in size went heavily against the Ghanaian.

Make him miss and make him pay
Rematches can be unpredictable, especially where the first fight was close. Strengths and weaknesses would have been figured out.

On some occasions they’ve been unappealing and unnecessary but others have served up crackers. A significant proportion of Azumah Nelson’s legend is built on rematches. They’re dicey affairs sometimes in what they represent for the fighters relative to their careers, and for Isaac Dogboe this rematch is make or break.

It will be a mistake for Isaac Dogboe to go with the game plan from the first fight. If the first fight taught us anything, it is that Navarrete won’t be easy to knock out. counter punching will win it for Dogboe.

It will require him to utilize the entirety of the squared circle and not remain a stationary target for Navarrete. There’s a difference between retreating, which Dogboe spent an awful amount of time doing in the first fight, and ring generalship.

His ability to manipulate space and positioning to dictate where and when the fight takes place will be key to winning. Counter punching is the reserve of the sport’s very best. From Pernell Whitaker, Roy Jones Junior to Floyd Mayweather, it requires a high level of ring IQ to properly execute to neutralize Navarrete’s size and reach advantage.

The technique has three components: timing, elusiveness and speed. A boxer must set up an opponent to commit to a punch or attack, make him miss or block, and make him pay by throwing a counter punch. He must be quick on his feet to switch position to avoid being countered.

The three components must be executed with perfect timing, speed and ruthless precision. The first fight also taught us that Navarrete is the better pressure fighter. He threw 118 punches more than Isaac Dogboe.

He threw and out landed Dogboe in jabs and power punches. Overall he outworked the Ghanaian. His game plan for the second fight will most likely be built around putting Dogboe under pressure and maintaining a distance that allows him to utilize his reach.

Dogboe therefore has the harder job of being elusive, picking his moments and picking his shots. Navarrete will seek to better his punch stats. Isaac Dogboe must make him miss and make him pay.

Stay on the inside
Fighting on the inside is another way of neutralizing pressure fighters with reach advantage. It’s a fighting style that refers to being up close within striking range to any part of the body.

The two opponents literally lean on each other and find close shots. Dogboe can turn his size and reach handicap into an advantage by fighting on the inside because Navarrete’s mid-section will be at his mercy, and given his body punching prowess he could do immense damage to aid his ultimate goal of knocking down the Mexican.

It’s a style that will also frustrate Navarrete because it effectively negates any edge his reach gives him.

The Navarrete conundrum
Pressure fighting may have won Isaac Dogboe the world title but Emanuel Navarrete proved to be better at it in their first encounter.

The conundrum Dogboe failed to solve in the first fight was that he was up against a pressure fighter like himself with an overwhelming height and reach advantage who is built to walk down opponents.

The talk about inadequate preparation culminating in poor stamina may be true but thankfully the fitness gap can be bridged with the right training and mental preparation.

It will however require top class technique and ring IQ to make nonsense of Navarrete’s size and reach advantage. Counter punching, ring generalship and inside fighting are the key.

Isaac Dogboe is capable of fighting on the inside but if it fails can he switch to counter punching? How well can he use the ring to control the pace of the fight and how well can he manage the fight? Emanuel Navarrete asked questions of Isaac Dogboe in their first meeting, the Ghanaian didn’t have the answers.

Those questions are likely to be repeated in the second show down. Can Dogboe come up with the answers five months after losing his WBO Super Bantamweight strap?