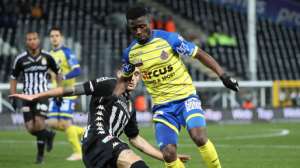 According to SportsworldGhana.com, two German Bundesliga sides Fortuna Düsseldorf and Mainz 05 are in a hot race to sign talented Ghanaian forward Nana Opoku Ampomah for the 2019/2020 season.

Though the two team have all tabled an offer for the Black Stars winger, however, reports indicate that Fortuna Düsseldorf leads the race to snatch him with their audacious bid.

The 23-year old has been impressive this season for Waasland-Beveren, scoring seven goals in 25 matches with six assists.

Turkish giants Fenerbache, are also proposed a mega move for the Ghanaian left winger who has a price tag of two to three million Euros.

However, they must beat tough competition from Royal Antwerp in Belgium who are also eager to sign the Ghanaian international.

He is under contract with Waasland-Beveren which runs through to 2021.

Ampomah has capped four times for the Black Stars of Ghana and most likely to make coach Kwasi Appiah’s final squad for the 2019 Africa Cup of Nations in Egypt.