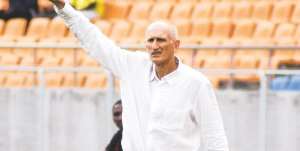 Head Coach for West Africa Football Academy (WAFA), Patrick Leiwig has admitted that his side deserved the 4-0 thumping they received at the hands of Accra Hearts of Oak on Sunday, May 5, 2019, when the two met in the Normalization Committee (NC) Special Competition.

The Phobians delivered an impressive performance in front of their fans at the Accra Sports Stadium yesterday to ensure they moved to the top of the Premier B division.

Speaking to GTV after the match, WAFA Coach Patrick Leiwig shared that his side did not play well on the day unlike Hearts of Oak that fought from all angles to get the win.

“Hearts of Oak played very well. We gifted them some goals too. They deserved their win. They came to the game to win at all cost. They were stronger and faster than my boys”.

“My boys we were just playing the ball around. Whilst Hearts of Oak kept running the ball at us. It happens in football. We have a young squad and we can only learn from what happened today”, he said.

Up next for the academy boys, they will be hosting struggling Dreams Fc in Sogakope on Wednesday, May 8, 2019.