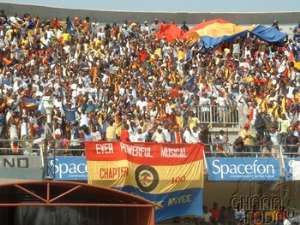 Accra, Jan 8, GNA - Football descended into tyranny when a section of Hearts of Oak supporters who were apparently not happy with the officiating of referee Joseph Lamptey during the late Nii Amugi Memorial Cup match at the Ohene Djan Stadium in Accra on Sunday chased the match officials away from the field of play.

The match, which was in memory of the late Ga Matnse, Nii Amugi who passed away sometime last year, was not helped by the fact that all the inner perimeter fencing at the stadium had been torn down in readiness for rehabilitation works at the venue towards the hosting of the 2006 African Cup of Nations to be hosted by Ghana.

The enraged fans in the 83rd minute rushed unto the unprotected field and overwhelmed the small security detail at the venue, hailing missiles at the officials' thus forcing the players and officials to run off the pitch for safety.

Olympics at the time of the incident were leading by two goals to one.

The agitation started when the referee ignored a penalty appeal from the Hearts fans and players when a defender of Olympics handled the ball in his box.

The anger of the supporters boiled over moments later when referee Lamptey whistled for a foul against a Hearts player, whom in the estimation of the already charged fans was rather at the receiving end of a bad tackle from the Olympics player.

All effort by the few police security on duty to calm nerves yielded no respite as they were overwhelmed by the surging crowd forcing the referee to take to his heels into the tunnel to save his life. After all attempts by the organisers to convince the angry supporters to return to their seats failed and the organisers had no alternative than to call off the match.

More drama was to follow later at the Presidential box when the organisers attempted to present the trophy to Olympics on the grounds that they were leading when the match was called off. Officials of Hearts protested against the presentation with an unknown fan managing to whisk the trophy away before it could be presented to Olympics.

After tempers had cooled down, Mr Jones Abu Alhassan, a Director of RTU prevailed on officials of the two teams to wait for the match report from the Match Commissioner and referee before declaring the eventual winner.

The match itself started on a very uncompromising note by both sides against the back drop that Olympics walloped Hearts 3-0 in the "President's Memory Lane match to weeks ago on December 26 at the same venue.

Hearts with nothing but revenge on their mind, came into the match and took an early stumble when Olympics Andy Pomaye bulldozed past the inexperienced Phobian central defenders to open the scoring in the second minute.

The Dade Boys who were determined to ensure that their bragging rights over their more illustrious city rivals was accomplished, nearly doubled their lead in the seventh minute but for a time diving save by goalie Laud Quartey to deny Pomaye from scoring his second.

Hearts Adjah Tetteh who moved from the midfield to lead the attack came close in the 11th and 14th minutes but some desperate defending by the Olympic defenders ensured that they maintained their lead. The Phobians who were clearly on top and pressed more men up-front finally pulled even when Eric Nyarko was the first to react to a loose ball in the box to fire his effort to the blind side of Oly's goalkeeper Joseph Halm for the equaliser to end the first half.

Olympics improved on their game in the second half an went ahead to take the lead again when Winfred Dormon tapped in a rebound after substitute goalkeeper Eben Dida who had earlier come on for injured Laud Quartey failed for make a first time save of a long drive from the right flank.