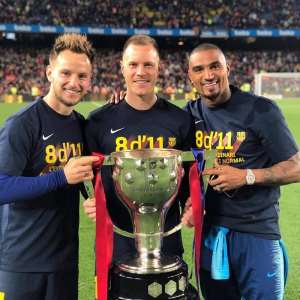 The Catalan based club defeated Raphael Dwamena's Levante UD with Lionel Messi scoring the only goal at the Camp Nou Stadium on Saturday evening.

Boateng joined FC Barcelona on a loan deal with an option of buying from Italian side US Sassuolo in the January transfer window.

The former AC Milan was not part of the Barcelona squad that defeated Levante UD.

Boateng has made only two league appearances for the Catalans since joining them earlier this year.

The former Tottenham and Portsmouth FC star will be hoping to get into Barcelona's squad when they host Liverpool in the first league of the Champions League on Wednesday.

However, the 31-year-old becomes the first Ghanaian to win the Spanish La Liga title.