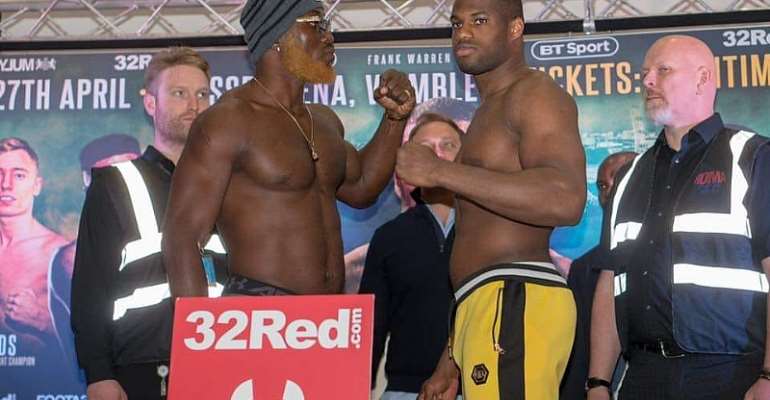 Events leading to the fight has not been palatable for the Ghanaian as he was issued with his UK visa on Thursday, two days to the fight, but his manager, Cabic Promotions did everything within their means to get him to London to fight and not to disappoint fans.

Lartey said on arrival in London that those who oppose him can do what they like, but God has destined the bill to come off and he is going out to express himself and win.

Also known as the ‘Son of the Eagle’, Richard Nii Lartey Harrison is very confident of victory. He said those frustrations are all part of life, and once he has chosen boxing as his profession, he only has to forget what is past and concentrate on the fight and the future.

He expressed that he needs the WBO Global belt to become the number 5 contender to the real title held by Anthony Joshua who is his real target.

He said Dubois aka ‘The Dynamite’ can be the son, pet or handbag of the promoter, but he is from Africa and has come to prove to the English people that the best boxers are from Ghana.

He said Dubois eats baby food and has been overhyped, but will meet the real match of his life with the challenge tonight.

Lee Manuel, a former Ghanaian boxer will be in the corner of Lartey since his coach was not given a visa.

However, Ellis Quaye, a co-director of Cabic Management believes he will be well as Manuel is experienced and can handle the job well.

Mr. Ivan Bruce Cudjoe, CEO of Cabic has asked Ghanaians to pray for his ward to win because victory for Harrison and Ghana will raise the image of the nation in the boxing world.

WBO Europe Champion, Daniel Dubois is undefeated in 10 fights with 9 knockouts while the man from Bukom, Accra, Ghana, the WBO Africa Champion, Harrison has also won 13 of his 14 fights. It is going to be a great fight and the best boxer on the night will win.