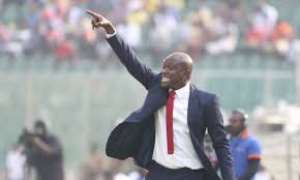 Head Coach for Kumasi Asante Kotoko, Charles Kwablah Akonnor has revealed that his side’s impressive performance in the ongoing Ghana Football Association (GFA) Normalization Committee (NC) Special Competition is as a result of the hard work of his technical team in preparing the players for the matches.

The Porcupine Warriors have improved upon their exploits from the CAF Confederations Cup into the novelty competition and are dispatching teams match after match. The Kumasi based side has only lost one of the 6 matches they have played so far in the competition and are top of the Premier A table with a total of 13 points.

Speaking to the media after beating Berekum Chelsea on Wednesday, April 24, 2019, Coach CK Akonnor indicated that the team has been doing well in the absence of injured players – Sogne Yacouba, Richard Senanu, Kwame Bonsu and Maxwell Baako – because of the expertise of his technical team consisting of Akakpo Patron and Joe Baah.

“The technical team – Joe Baah, Akakpo and the rest – We have been able to mobilize ourselves also to talk to the players to understand where we are. It got to a time myself I had to talk to them as a group”.

“For us to see them perform like that is a credit to all of us and am happy it's going this way and we want to continue”, Coach Akonnor said.

Kotoko will open their second-round campaign on Sunday when they visit Berekum Chelsea on Sunday, April 24, 2019.